Common Name:In English: guarana. The popular designation Guarana is derived from the word “wara’ná” in Tupi-Guarani means “fruit for the eyes of the people.”

In Portuguese: guaranaizero (a word referring to the tree), guarana, cocoa brésilien.

Where does guarana live?

Guarana is a plant native to the Amazon jungle, but now its cultivation is spread throughout South America.

Only one species of Guarana grows in tropical Africa. Adapted to temperate and tropical climates, it grows in sandy and wet places.

Guarana is a plant used since ancient times, although there are few written records about this tradition. The cultures of the Amazonian people prepare many ointments and medicinal preparations with guarana seeds (More about guarana in the past) 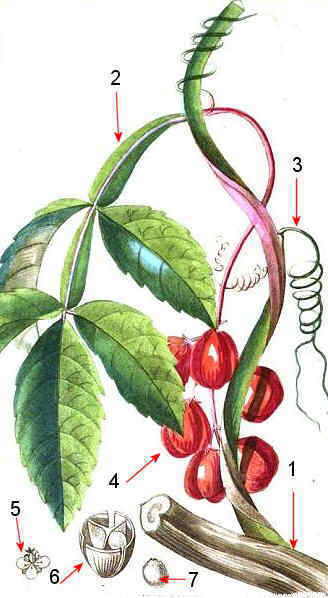 Guarana is a climbing shrub and vine that grows in the Amazon jungle. It is used from time immemorial in medicine by the Amazonian peoples

Its stem (1) is yellowish brown, long, woody and flexible. This shrub can climb up to 10 meters high, making it almost impossible the task of collecting their seeds in their natural habitat.

Its leaves (2) grow the stem alternately. They are compound and consist of five to nine lanceolate and toothed leaflets between 15 and 33 inches long by 9 to 14 inches wide. Imparipinnate with a terminal leaflet. Guarana leaves are dark green with the back clearer and with prominent venation.

In the axils of the leaves, that’s to say, the angle between the petiole and stem, the tendrils grow (3). They are very common in other plant vines.

The inflorescences are axillary clusters (4), which are arranged in the flowers. Guarana is a monoecious plant, that’s to say, it has male and female flowers. These flowers, arranged in clusters, are small and very numerous, since each cluster can be between 15 and 30 inches long. Flowers (5) show a zygomorphic calyx composed of five sepals and four white petals. The male flowers have eight stamens and female flowers an ovary with three carpels.

Its fruits are nuts (6) in capsule form, pointed oval, formed by three septa or locules (walls of the capsule) between 2 and 2.5 centimeters wide. This fruit has a bright reddish-yellow on the outside, and is white on the inside. The fruit is dehiscent, and at maturity, its opening is caused by the separation of the Septa, which is known as dehiscence septicidal.

The opening of the fruit exposes from 1 to 3 seeds (7) dark brown, spherical and coated with an aryl. The aryl is a thin coat covered with a white farinaceous seminal mass, which is easily removed after the drying of the seeds.

What is guarana used for?

Guarana seeds are being used for thousands of years by Amazonian tribes with numerous therapeutic purposes, such as:

Dr. Asland, at the Brazilian Congress in 1982, referring to the medicinal properties of guarana, stated: “You have, naturally, one of the most powerful fountains of youth you know”.