Home › Medicinal plants › Mate properties
This article was endorsed by Elisenda Carballido - Dietitian nutritionist. Postgraduate in Phytotherapy and master in Nutrition and Metabolism.

Mate, also known as yerba mate, chimarrão or chimarrón is a stimulant tea that is especially consumed on some South American countries such as Argentina, southern Brazil, Paraguay and Uruguay.

Caffeine or “mateine” is the active principle of the leaves of mate, which is an alkaloid with stimulant properties for the nervous system.

In regions where it is traditional, it is usual that this drink is consumed at all hours.

Due to the wide use of this plant, mate tea has been widely studied and its virtues are well known

A stimulant beverage to body and mind 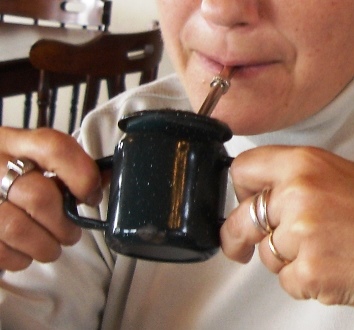 Photo of mate such as it is traditionally consumed

Mate leaves for preparing tea contain 1 to 2% caffeine. Caffeine is a known stimulant, also present in coffee, which acts directly on the nervous system producing the effects of caffeine.

Often, the caffeine found in the mate is called with the name “mateine”, although it is the same substance that the caffeine in coffee.

When caffeine is absorbed, it travels through the bloodstream to the brain, where it works. Caffeine binds to a type of brain receptors called adenosine, causing increased mental alertness, wakefulness and promote better association of ideas and greater resistance to fatigue.

It increases brain performance and can be used in times of exams or to improve the overall learning capabilities.

How much caffeine does mate have?

It is estimated that 1 hour after drinking mate, from 80 to 100mg of caffeine are consumed, the equivalent of a cup of coffee, with similar stimulant effects. Yerba mate also contains B vitamins that boost energy functions. The stimulant effects of mate are associated with increased sexual libido, being an aphrodisiac remedy.

Mate for physical and mental fatigue

Caffeine in mate is a natural stimulant of the nervous system. It can help treat low mood and depression. Antidepressant effects are produced because of the 40-50% inhibition of the enzyme monoamine oxidase (MAO), which is responsible for degrading the serotonin (neurotransmissor regulating mood).

It is a brain tonic that stimulates, motivates and cheers, counteracting reluctance, passivity and inhibition. It is indicated in cases of nervous fatigue, physical and mental exhaustion, exam times, people under stress.

In some treaties mate appears as a chronic fatigue remedy, although due to the side effects of caffeine, we recommend taking other remedies for fatigue.

*More information on the matte side effects in the listing above.

Mate is used in diets to lose weight because of the following properties:

Mate for your heart

– Lowers cholesterol: Mate helps keep arteries elastic and healthy. It has antioxidant properties to protect the body and the cardiovascular system from oxidation and premature aging.

Mate extract lowers bad cholesterol and may have beneficial effects on atherosclerosis.

Mate is sold in bags, ready to prepare infusions

– Digestive Properties of mate: mate stimulates bile secretion and promotes digestion of fats from the diet. Drinking mate after meals helps to digest fats and heavy meals. Mate is a remedy for slow digestion, and biliary dyskinesia.

In some regions, it is combined with lemon verbena to give better taste to the beverages, and, in turn, this provides the soothing and carminative virtues of the last plant.

– Dry leaves: 2 to 4g. by means of infusion to three times daily.