Distribution: It grows as a feral plant near rivers. 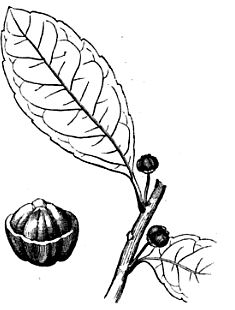 Botanical illustration of mate with the leaves and fruits

Mate, (Ilex paraguariensis), is an evergreen, dioecious tree, measuring up to 18m.

Mate crown has several branches that are pruned to obtain higher yield of leaves.

The leaves are the part sold, which are taken as an infusion because of caffeine. Its caffeine content is large (0.2 to 2% in leaves), given that the coffee beans have the same percentage (1-2%).

Being a dioecious plant, there are male trees and female trees. It is believed that male trees are more productive.

The inflorescence is a cluster of 3-11 flowers born from the axils of the leaves. The flowers are small, 4-5 petals and sepals them, whitish. In the genus Ilex there are so many stamens as flower petals.

Mate fruit is nucule with a 4-5 pyrenes. (a pyrene is a dry fruit similar to a drupe with several seeds)

The tree blooms in spring (October-November in the southern hemisphere). Insects pollinate flowers, which bear fruit in summer, from March to June.