Home › Food › History of barley
This article was endorsed by Elisenda Carballido - Dietitian nutritionist. Postgraduate in Phytotherapy and master in Nutrition and Metabolism.

Importance of barley along the history

Barley is mentioned in the Bible. For example, in Chapter VIII of Deuteronomy Moses points to the benefits received from God in the Wilderness. It says:

The ancient Egyptians used it in their table, but preferred wheat, because this cereal by itself is inappropriate to make bread since it has a low gluten content. Yet, they produced unleavened bread (flatbread) with it.

The importance of this cereal in the Egyptian world was based on brewing. To do this, they left to ferment barley bread in water.

Barley in the Greek culture

Greek culture gave more importance to the use of barley than the Egyptian one.

Their diet was based mainly on this cereal. Breads were made with refined flour in which barley mixed with wheat for a better bread flow.

The following extract of the Greek writer Homer (VIII century BC) in the Iliad provides a clear example of the importance of rice in their culture. In fact barley qualifies as “sacred” because the Greeks used in sacrifices and offerings to the gods.

Barley for the Roman empire 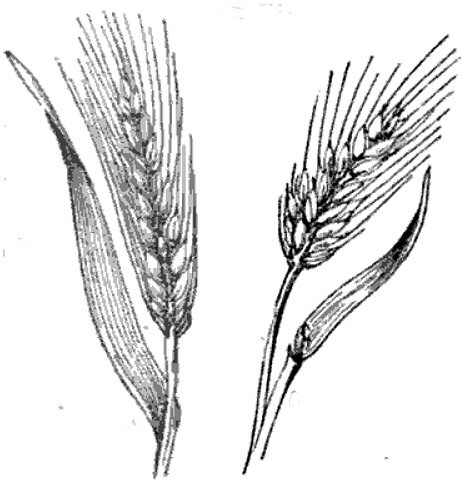 Drawing of two ears of this cereal

No less important was the barley for the Romans. These learned to make bread of the Greeks. Like them the bread flourcontaining various cereals, including barley, had an important role.

The Romans knew the food properties of barley. They knew their nutritional value and its ability to provide energy on an ongoing basis. Do not forget that barley was a food base for gladiators who were called hordearii (Those who eat barley)

Barley as a food for poor people

Outside the classical world, barley became less important as food. Wheat took his place, especially in the wealthier classes.

Barley was considered as a more suitable food for livestock, or a food for the lower classes or as a general resource in the event of difficult periods in which wheat was scarce.

In cold areas of eastern Europe barley has been a staple food until the nineteenth century, when its importance has been overtaken by potatoes.

Currently, used as a cereal to make bread is very limited, except in populations in Tibet, where it is the main food as other grains can not be cultivated due to a very cold climate.

With roasted barley flour Tibetans prepare tsampa, the main dish of food. This is usually done by introducing a handful of barley flour in a bowl with some tea. Then stir it with the fingers to make a more or less consistent paste.

This food also forms the basis of their diet. It is used in Buddhist ceremonies, anniversaries, birthdays and funerals. It is the staple food of the Sherpas, to whom it provides a great energy.

Equally crucial is its consumption within the Berber population of the Maghreb.