Home › Food › Properties of peppers
This article was endorsed by Elisenda Carballido - Dietitian nutritionist. Postgraduate in Phytotherapy and master in Nutrition and Metabolism.

Pepper (botanical name: Capsicum annuum) it is a plant coming from America of Potato family – Solanaceae – the same as the potato or the tomato. Its cultivation is practically extended all over the world.

It is specially important in the East and South of Asia, where its fruit is part of the traditional kitchen, appearing in multitude of dishes.

Red peppers constitute an impressive source of vitamin C and A, being one of the more detoxificant foods in the world. The mature red peppers overcome the citric fruits (oranges, lemons, grapefruits, etc.) in vitamin C being one of the plants of the world that possesses more quantity, after the acerola (Malpighia glabra L) or the wild rose (Rosa canina), therefore they are essential for those that look for a depurative diet.

It is equally important this vitamin for the appropriate absorption of iron, calcium or other amino acids. In the same way, they help in the cure of wounds. Their deficiency causes a general weakness in the organism, manifested in symptoms like fragility in the hair, gums that bleed, wounds that never heal, lost of the appetite etc. it is specially interesting to eat this fruit during convalescence, after having passed some illness because they help to increase body defenses.

Although vitamin C does not cure common cold or flu it can relieve their symptoms and reduce its duration. Citrus fruits like oranges, lemons or grapefruits, peppers, dark green leafy vegetables like cabbage or broccoli, are good sources of this vitamin.

Also, and especially when very mature and red, they contain, as well as tomatoes, a component named lycopene that constitutes, beside the vitamin C, one of the best antioxidant, able to decontaminate the body and liberate it from the negative influence of the free radicals. These can be responsible for many diseases, including cancer development.

Its content in beta carotene is very high, inferior to the carrot, but superior to most of fruits. This element, as well as lycopene, exercises a great antioxidant power. It is also very rich in triptophan, which ingestion helps to combat the symptoms of the depression. 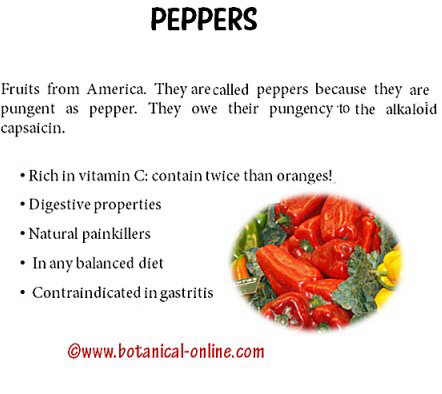 Especially the hot red peppers or chilies, although the last ones are not very appropriate for those with a delicate stomach and, in any case, we should abuse of their consumption since, in the long run, they might produce us a gastritis or another affection of the digestive tract.

The same sweet peppers have quite a bad fame of being very indigestible, which is not really certain.

It is true that we should chew them well and that many times the bad digestion of this fruit is not due to it, but to its bad combination with other foods.

Surprisingly and, in front of this widespread opinion, raw peppers are more digestible that those cooked. In fact, they certainly favor it by stimulating the gastric and biliary juices.

Even hot red peppers, used moderately, have been proved to have a positive effect in the prevention of stomach ulcers.

Among the appropriate properties of peppers for the digestive tract also mention their anti-diarrhoeic and anti-emetic properties should also be praised. Therefore their bad legend is completely unjustified.

Peppers for weight loss and constipation

For their high content in water, they are very appropriate in weigh loss diets, or to treat obesity, provided we eat them raw, in salad, mixed with tomato, lettuce, onion, etc.

They are also excellent and extraordinarily light when we eat them roasted directly on embers. Besides their wealth in water, its great abundance in fibers creates in our stomachs a great satiety sensation, which allows our body to be a long time without ingesting another foods, since they are assimilated little by little.

Equally it has been demonstrated as the ingestion of hot peppers increases the metabolism and helps to eliminate fat.

Their fiber drags the feces of the intestine, avoiding rotting and acting as a laxative, so that, besides being recommended for people who want to lose weight, they will also be very convenient in all those that suffer from constipation.

To give to our meals an exotic touch, we can make use of cayenne which is obtained from the very mature pungent red peppers, once they have been dried off and ground.

The Arab cuisine, for instance, makes a very habitual use of these varieties that, besides giving a very colorful touch to our meals, intensify their flavor and increase one’s appetite, maintaining all their alimentary properties at the same time. Although it is necessary to remember the use of these preparations with sensitive stomachs.

Paprika and red hot peppers, for their content in salicylates and capsaicin, possess analgesic properties, being very appropriate to calm the pains of the rheumatic illnesses, neuralgias or postoperative pains. An external popular remedy consists in mixing paprika with some salt and dissolving it in water. Placing it with a gauze above the aching articulations during one hour, more or less, it will alleviate the pain.

There are many creams that contain capsaicin to apply them in external use, in the treatment of the pain or affections of the skin, as psoriasis, herpes, etc.

Sometimes they produce adverse reactions and they should be used with caution, especially avoiding the contact with the eyes, which will produce an intense pain. A better way to get its effects is ingesting these foods in our meals.

Pungent peppers have been used and they are continued using thoroughly as natural remedies. They are used in cases of bronchial congestion, as expectorants to liberate the lungs from mucositis, arthritis, etc.

Recent studies conducted in the United States demonstrated in a study carried out on mice with prostate cancer that high doses of capsaicin that reduced the development of cancer cells.

According Hiley, a spokesman for the Organization for Prostate Cancer in the UK, this substance could be incorporated into new medicines for cancer treatment in the near future.

However, the same spokesman, cautioned that the study is in its initial phase and you should not abuse the consumption of hot peppers or chilies, because, according to some researchers, it is responsible for the high number of stomach cancers in India and Mexico.

Latest scientific advances on the analgesic properties of hot pepper

The latest scientific studies on mice have shown that the internal use of QX-314, a derivative of lidocaine, a local anesthetic mixed with capsaicin, the active spicy ingredient in chili pepper, can eliminate the sensation of pain without paralyze the affected limbs or body in general.

So far, the external use of capsaicin has been already used in medicine to relieve pain. However, researchers went further and studied the effects that this product could produce when used internally. To do so, they provided the sciatic nerve injection of mice with the mixture of QX-314 and capsaicin. Rodents kept moving without realizing the pain.

According to the study, capsaicin, makes a passage in the wall of nerve cells pain receptor so lidocaine can penetrate. The advantage with other current anesthetics is that this combination appears not to affect the rest of neurons that remain active.

This discovery can be very important if you can apply to people because that would eliminate pain without the affected members become numb or brain would not be affected by the side effects of existing analgesics (numbness, drowsiness, inattentiveness, lack of coordination, etc.).

Moreover, its application in surgery would still be more important to allow surgery without the loss of consciousness that occurs with current total anesthetics or temporary paralysis that occur when local anesthesia is applied.

In practice this could mean, for example, we could go to the dentist without leaving half-paralyzed mouth, we should not suffer the unpleasant effects after receiving anesthesia in surgery or that women could give birth with the implementation of an epidural without having the lower part paralyzed. (More information on the capsaicin in the listing above)