How to grow a chestnut tree

What is a chesnut tree?

It is a deciduous tree that can reach 35 m. high.

Leaves oblong-lanceolate, up to 25 cm long, pointed and serrated.

Flowers in catkins, erect, not pendulous as in most of the Fagaceae. The male flowers are located at the top of the catkins with stamens in great numbers, yellow and with unpleasant odor. Female flowers located on the bottom green.

Fruits (nuts) are clustered in groups of 1-3, protected with a thick husk covered with thorns.

It flowers in July and the fruit is harvested in October or November. This tree can live many years and can reach a large size, and there are species with trunks of more than 5 m. in diameter and more than 1000 years old.

It has been said that it is a tree that was originated in Asia Minor where it was introduced by the Romans in many Mediterranean countries. Bread was done from the chestnut fruit to feed the troops and for horses food. This has explained why it has been spread in many regions of Mediterranean Europe and in many parts of England, France and Central Europe. 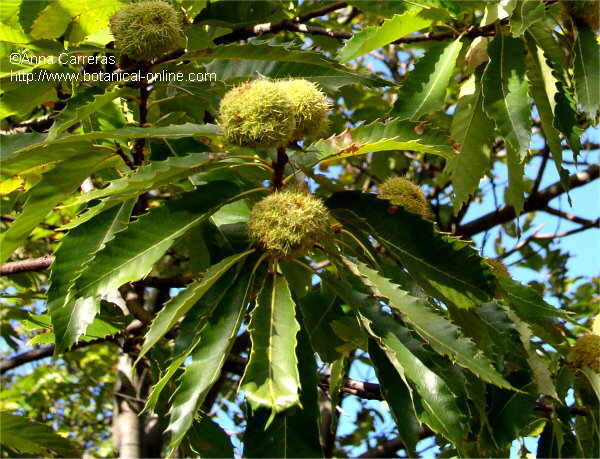 Leaves and fruits of chestnut, the tree that gives the chestnuts

Among the main species or varieties of chestnut tree we have:

The chestnut tree is a plant that needs plenty of water during the vegetative period and therefore it can only be planted in places that have a good moisture in both environmental and in the soil during the summer. However, water from heavy rainfall that remains in the ground does not suit him because it can develop produced numerous fungal diseases.

It cannot be planted in places which do not receive a minimum of 700 liters of annual rainfall, requiring that a quarter of them occur during the summer.

It requires a not very hot exposure to maintain the humidity, so it should not be exposed to sunshine with exposure to full sun all day, especially in hot areas. It prefers shady places with good lighting and sheltered from strong winds that dry the air. It does not like full shade, especially when young and needs light to grow properly. Because its flowers appear are at the end of the branches, they need good light to bear fruits.

It grows very well in the mild Atlantic climate with foggy days without frost, especially in spring when its vegetative phase has started and could damage it. In temperate climates, it can be found planted at sea level. The ideal average temperature for its development it is between 10 and 14 º C.

In warmer climates along the Mediterranean, it needs to be planted on high places where the rigors of summer are lower and where the field can maintain the necessary humidity. Under these conditions, we found good chestnut plantations in most areas of the Mediterranean mountains between 600 and 1200 meters above sea level, forming mixed forests with continental oak or mountain oak. Good examples of these are found in the Pyrenees in northeastern of Spain.

Wild chestnut trees reproduce spontaneously from seed. The chestnut tree has a slow growing and requires about 25 years to produce fruit when planted from seed.

We can plant chestnut trees from seed. We will keep the chestnuts within their husks during winter and in spring we will plant them in a hole about 6 cm.

When the plant is 5 years, we will transplant it in its final place in pits of 70 cm in autumn, if the weather is benign, or in winter, if it is colder. When the plant is already well established, something that will normally happen in a couple of years, will be grafted.

Planting the chestnut manually using grafted nursery plants can result much more comfortable and practical. This type of planting will take place in spring or early fall. Planted in this way, it will produce fruit after about 8 or 10 years.

Although they can grow in many soil types, provided they are not very chalky, it prefers silica-rich soils that are deep, loose, with sufficient organic matter and a pH between 5 and 6. Possessing a highly developed root system, it needs to grow horizontally in depth soil. (It needs at least a depth of 50 cm of usable soil). It also requires a minimum distance of about 10 meters from tree to tree for fruits to develop properly.

It does not bear too chalky soils, especially when limestone is decomposed into the top layers of soil,. Clayey soils are prone to water accumulation in the roots, so they are not appropriate for this tree. Granite soils are ideal, although it can also live in limestone soils when heavy rainfall is able to clean the area of lime which is dragged into deeper layers.

When it grows spontaneously, it can be found in poor soils, usually in sandy soils where other trees,such as oaks or beeches, can not thrive.

Chestnut trees are very hardy trees that do not require much care, however, it has been proven that working the soil increases its production. You can even use the space between trees to plant cereals.

Chestnuts should be pruned when they are young to remove lower branches. This pruning will set the future shape of these trees. Branches, when young, should be modeled to provide them a rounded shape, preventing them from growing in an irregular manner, which commonly occurs with species that grow wild.

With the shape finished, when the tree is grown, pruning should be limited to eliminate those old or dead branches in summer. Rejuvenation pruning done in the winter can help increase production.

Between the main diseases we can point out:

This pest was introduced from Japan, since chestnuts imported from Japan are carriers of the disease but resistant to it.

People is still trying to combat this disease in America, although the small shoots that grow from the stumps of dead trees are attacked by it and die when they become a little bigger. At the moment there is no solution for it. This pest does not affect Chinese chestnuts (Castanea mollissima) or Japanese chestnuts (Castanea crenata), so that the only feasible solution seems to be to produce hybrids between American chestnut wand other species that are immune to the plague.

The European chestnut (Castanea sativa) may be attacked by this disease but it is a much stronger species than the American one, because this disease causes less serious effects than the U.S. which allows the attacked trees to recover. It should be noted, however, that the disease is well established in Europe, Africa, Asia and North America, having appeared in most countries having chestnuts (Spain, Italy, France, Greece, Germany, Poland, Portugal, Russia, Tunisia, China, Japan, North Korea, South Korea, United States, Canada, etc.).

The disease is caused when the fungus penetrates the wounds of trees. this especially occurs with temperatures between 18 and 38 º C and the presence of dispersing elements such as rain or wind. Once inside the tree, it can kill it if the fungus is highly virulent or form cankers on the bark of the branches or trunk in case it has a lower virulence. Cankers appear as swollen and vertical fractures in the crust, sometimes oozing an orange-yellow liquid. The hyphae of the fungus develop under the bark.

How to treat the chestnut blight

The disease control involves the use of resources such as:

This disease is favored by warm weather, with temperatures between 15 and 30 º C and high humidity conditions in the soil. Water retention in soil encourages its appearance and increases its virulence. Treatment and prevention of this disease can include:

The main external symptoms are the appearance of dry leaves and twigs and the weakening of the trees in general. Roots are the most affected, because this fungus rots them. Trees can be infected from one another by contact with the roots.

The infection is opportunistic and takes advantage when the tree is weakened, which can occur with high humidity conditions or in places with poor drainage where water accumulates in the roots. Continuing drought can also affect them. Fertilizer can promote excessive growth of the fungus.

For the treatment and prevention of armillaria mellea, the following methods can be used:

The treatment involves burning of leaves to prevent the development of fungi on them.

Although is has been tried the removal of insects by chemical means, the only effective solution is the elimination of concerned chestnut before the larvae gets into the ground.

More information on the chestnut tree.