Cayenne pepper was used in pre-Columbian America, along with other species of peppers. (See “Types of peppers” in the listing above)

It seems that, by then, most of the peppers were more or less spicy, but cayenne and was distinguished for being hotter than the rest.

George Graves in his Hortus Médicus in 1834 writes:

“The common capsicum is a native of both the Indies and was introduced into Britain in 1596. It is of easy cultivation requiring to be raised on a hot bed and when the seedlings have attained a few inches in height to be planted in the open border where they will flower in June and July and ripen their fruit in August September or later. All the species possess the pungent property of the common kind but in greater or less excess.

The fruit of various species of capsicum is used as a condiment under the name of Cayenne pepper. The Capsicum annuum is cultivated in Britain for the purpose of pickling. Its fruit is used for this purpose both in a green and ripe state but it never acquires that pungency for which the East and West India pickles are so much valued The Capsicum frutescens is the hottest variety and from it alone the Cayenne pepper ought to be prepared”

These is not the only reference with respect to the spicy taste of peppers, including what is now known as sweet pepper (Capsicum annuus). Surely the constant selection of these plants could achieve the separation of what is currently known as two distinct varieties: sweet peppers and hot peppers, the latter also called chillies or Ajis. 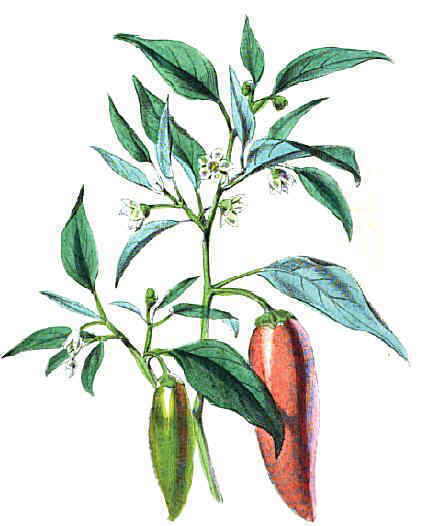 A drawing of Cayenne pepper

John Steggall in his book “Text book of materia medica and therapeutics” of 1837 writes referring to peppers in general:

“The odour of capsicum berries is peculiar and somewhat aromatic stronger in the fresh than the dried state. The taste is acrid and burning causing an intense heat in the mouth which lasts for some time.

The acrimony according to the analysis of Braconnot depends upon an oily or resinous substance which he named capsicin and which he extracted chiefly by the agency of ether. He describes it as an oil or soft resin of a reddish brown colour with an insupportably hot and pungent taste It is slightly soluble in vinegar”

Among them, the most important is capsaicin, a water-insoluble substance, colorless, odorless.

Small doses produce a warm feeling in the mouth and, as the dose is increased, it produces a painful sensation by stimulation of sensory neurons of the mouth or skin.

The brain takes a message of pain and reacts producing endorphins a substance very similar in structure to morphine, which can eliminate the sensation of pain.

Moreover, in addition to “fool the pain” it has been found that this component is capable of neutralizing substance P, a transmitter of pain from the periphery to the brain. Decreasing this substance, the brain does not get enough pain signals from the affected area.

Cayenne is capable of producing tears when taken, not even pure as happens when we eat Tabasco. It also produces strong sneezing when inhaled through the nose.

Among the main properties of cayenne pepper we can mention the following:

– Indigestion: The ground powder or the whole fruit may be added to foods to digest better.

– Constipation: acids increase intestinal motility and help remedy constipation problems. We must not forget that this spice is rich in a number of laxatives components, such as calcium, magnesium and cinnamic acid.

However, given the small amount we generally ingest, it seems that, in this case, they do not influence too much on their ability to treat constipation.

– Flatulence: If we digest food better, we can avoid problems related to poor digestion such as excessive gases or flatulence. Moreover, its content in carvone and camphor also appear to influence the removal of gases.

– Stomach ulcer: cayenne pepper seems to be effective in healing ulcers. The reason seems to be that this substance increases the production of mucus that lines the intestinal mucosa protecting it. (You can add this this spice to meals or choose to use 1 capsule for 3 meals)

– Cardiovascular: Their circulatory properties are not as proven as its digestive properties. Some studies suggest that cayenne, when introduced in a usual manner in the diet, can lower cholesterol and triglycerides and prevent hypertension.

A very effective remedy to treat poor circulation consists in mixing a quarter teaspoon of cayenne pepper, two tablespoons of powdered talc. Then you can rub your feet with this powder to increase blood flow to the area. This is sometimes the reason for the feed to be tired

This treatment can also be very appropriate to remedy cold feet, especially in patients with Raynaud’s disease, chilblains, or to prevent the onset of frostbite.

Applied on the hands can help achieve the same results. Nose should be protected to prevent aspiration of dust that can cause strong sneezing, and hand should be washed with hot water to avoid this powder to contact with the eyes or to prevent to inhale it,

Cayenne cream may also be used to improve poor circulation in the legs or feet.

– Metabolism: Other studies seek to relate the consumption of this type of pepper with decreased cancer. It is true that this plant is rich in antioxidants, such as vitamin C, and numerous flavonoids that give this fruit its flamboyant colors making it so attractive.

Capsanthin is the most important flavonoid for these and other peppers acquire their beautiful red color. Other pigments with antioxidant properties would be, for example, criptocapsin and capsorubin.

One must bear in mind that vitamin C, in most cases is lost on drying peppers to obtain powder. Anyway, flavonoid intake would be so small, as it is a spice that we must eat in moderation, that they would probably not have much influence on the antioxidant capacity of our diet.

– Respiratory System: In the respiratory system it acts as a mucolytic, being able to soften the secretions, and as bacteriostatic, inhibiting the growth of bacteria. Mucolytic properties are provided by its content in ascorbic acid and acetic acid, while terpineol-4 provides bacteriostatic properties.

Thus, it has been used used in the form of infusions in the treatment of bronchitis or prevention of cough attacks. In external treatments, these same infusions charged a bit more have been useful to perform gargling with which to remedy pharyngitis or tonsillitis.

The cayenne pepper in the treatment of pain

The most important medicinal use of cayenne relates to its use as an analgesic in the treatment of pain. Using infusions of cayenne can help ease the pain. (Infusion of a quarter teaspoon of cayenne pepper in a glass of hot water. Drink it throughout the day in small sips)

However, for the treatment of pain, are we can mainly use cream preparations, oils or ointments which, when applied externally, can reduce the sensation of pain caused by painful diseases such as rheumatoid arthritis, fibromyalgia, herpes, etc.