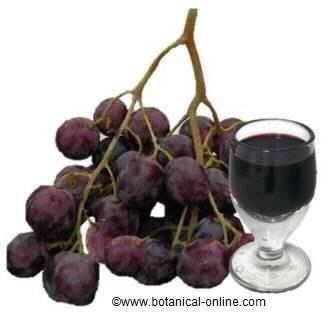 Resveratrol can be found in grapes and black wine.

Resveratrol is a compound that can be found found in grapevine (Vitis vinifera). It appears in virtually every plant, including roots and seeds as a response that makes the plant to attacks by an infectious fungus botrytis.

The plant parts containing higher quantities are the fruit skin and seeds. That is why red wine has a higher rate than white, since in the development of this type of wine, in addition to the pulp, seeds are also macerated. Something that does not happen in white wine process

– Cardiovascular diseases: Resveratrol, along with the flavonoids catechin, gallocatechin and anthocyanin, is responsible for the fact that those who drink red wine present less heart attacks.

This is explained because of the properties that polyphenols have, together with other components such as tannins, to decrease cholesterol and triglycerides making our blood more fluid. This action can prevent the occurrence of thrombus.

This seems to prove that people who regularly consume red wine moderately are less likely to suffer strokes, among which we could include heart attacks, strokes, thrombosis, poor circulation, etc. According to most experts polyphenols are responsible for this property. They are capable to reduce atherosclerosis up to 30% and prevent the appearance of low density cholesterol or bad cholesterol in the blood about 96%.

Drinking three drinks per day for men and two for women, along with other foods can be a good way to cure heart health according to a study conducted at the Hospital Clinic of Barcelona (Spain) by Dr. Alvaro Urbano-Marquez and Ramon Estruch, in a study, called Wine and cardiovascular disease.

This theory can justify what is known as the “French paradox.” Western countries are world famous for its high rate of deaths resulting from strokes. However, France, being a Western country, it is not included in the statistics as being among the countries of the world which produce the majority of strokes. The reason seems to lie in the fact that it is also the country where more red wine is consumed.

– Cancer: Besides the protective properties of the circulatory tract, it has been verified that this component has antioxidant and anticancerous properties, especially in regard to breast cancer , skin and prostate tumors. This is due to its capacity to prevent cancer formation by inhibiting the development of the cancerous cells.

– Eye diseases: These same properties seem to be positively influential on the health of your eyes. It appears that antioxidants prevent free radicals attack the cells of the retina that are very sensitive to oxidation. This allows a protective effect of one’s eye health. Drinking red wine can prevent many eye diseases especially those that respond to a degenerative nature, such as loss of vision caused by macular degeneration, very common to people when they become old.

– Alzheimer: This component can also have a positive effect in the prevention of Alzheimer, such as is being studied. Studies so far seem to conclude that those who drink red wine in a regular and moderate way are less likely to develop this disease.

As we said, it appears primarily in grapes and red wine. It can also be found in Polygonium cuspidatum, a Japanese plant or in yucca (Yucca spp.)

It can also be obtained through supplements in which the component has been extracted precisely from the Japanese plant, not from grapes. Normally this component is not pure but it is sold in combination with other vitamin supplements in the form of capsules or tablets.

Resveratrol should not be administered to persons who are pregnant or those who are allergic to this component. Pregnant women should also not try to obtain it by means of drinking wine.

Apart from wine and supplements, resveratrol can be acquired through the juice of wine, as demonstrated by recent studies. This is particularly interesting for pregnant or nursing women, but it can also be a useful way for everybody to get such a beneficial component without falling into the dangers of alcoholism.