Cucumbers (Cucumis sp) are plants of the gourd family – Cucurbitaceae, to which some well-known fruits as melons,  chayores or courgettes belong.

Origin and history of cucumbers

They are native from India and they were already used abundantly, together with the melons, in the old Egyptian culture.

According to John Heinerman in his Encyclopedia of Vegetable Fruits and Herbs, remedies with cucumber for the skin were already used by Cleopatra.

Later on, Greeks and Romans also consumed them habitually.

They were so appreciated in the antiquity that Israelis in the exile complained to Moses about having lost the main luxuries of Egypt that, according to them, they thought to be cucumbers and melons.

In recent times they appear as cultivated plants in warm climates in many countries of the world.

Varieties and classes of cucumbers

Different species exist. Bigger ones are used to eat fresh in salads (Cucumis sativus); other smaller ones, as the Indian species Cucumis anguria, are used as a species to put in vinegar.

Some have a more exclusive use, as the Cucumis myriocarpus, a species from South Africa, with potent vomitive properties or the Arabic species Cucumis prophetarum that constitutes a strong purge.

Besides these properties, they are used by the perfumery industry for their wealth in aromas to provide odour to certain products. 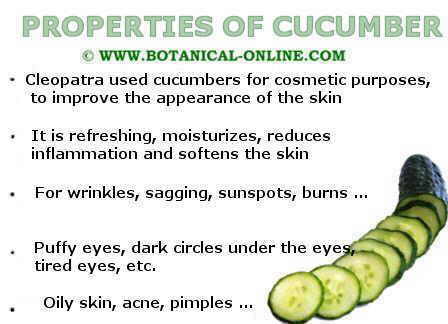 Cucumbers for your skin health

Cucumbers, because their wealth in water, vitamin E and natural fats, are one of the best remedies for the external care of the skin.

It contributes all its oils and hydration, necessary to soften and rehydrate this organ.

Masks with cucumber help improve the appearance of the skin, giving back all the freshness and texture that is lost as a result of environmental aggression or aging itself.

Smokers can benefit from their effects against the oxidative action of free radicals of tobacco.

For burns in general or, being very antioxidant, they are very appropriate for skins that have suffered the consequences of a prolonged exposure to the sun or in case of frostbite.

Besides the emollient properties for the skin, it is necessary to mention their cosmetic properties. In this way it can be very suitable for:

Its external application reduces wrinkles better than most other creams on the market, even the most expensive ones.

It contains water and antioxidants, which hydrate the skin and delay the degradation of hyaluronic acid and elastin, substances that make the skin does not lose its elasticity.

How to remove your wrinkles with a cucumber mask

A very appropriate cosmetic preparation to remove the wrinkles is stated in John Heinerman’s ” Encyclopedia of vegetable Fruits and Herbs”, describing a simple remedy used by Cleopatra, the famous queen in Egypt:

Remedies with cucumber for your eyes and feet

Other curative remedies with cucumber

Cucumbers have traditionally been used to expel the intestinal worms and tapeworms. This remedy is carried out in form of purges with mashed seeds mixed with sugar that should be taken before any meal.

The fruits of cucumber (Cucumis sativus L.) are especially recommended for those who wish to lose weight.

They are formed in 96% of water and have little caloric value, which does not reach 20 calories per 100 gr.

A spring cucumber diet will be very suitable for people who want to lose weight or who suffer from serous accumulations in the extremities – edemas -, while at the same time it helps to detoxify the body.

These properties make cucumber a extremely light and suitable food to combat obesity.

Cucumbers to purify your body

Cucumber is used in depurative diets to help remove uric acid, avoid  fluid retention and, because of its laxative properties, cleans the bowel of fecal waste.

Cucumbers are a good repair of the intestinal mucosa, so its consumption is very suitable for those who want to strengthen the stomach

However, you have to be careful to chew it very well, since, being a fruit very rich in cellulose, it can be indigestible if eaten fast and not chewed.

It is also Not recommended in people with a delicate stomach or in those who have a tendency to suffer from diarrhea.

Neither should elderly people or those who are prone to suffer from flatulence abuse it.

The youngest and tender cucumbers are used to prepare pickled gherkins. Because of its vinegar content and high salt content, they are not as desirable as fresh cucumbers.

Except in these cases, in general, it constitutes a very adequate food to protect the stomach and clean the intestines when regulating the intestinal flora by action of a component denominated erepsina.

* Recipes with cucumbers: Gazpacho, Noodles with mustard and pickles