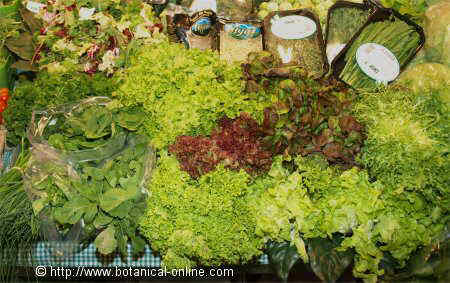 The wide availability of vegetables in the market today lets us eat a wide variety of these foods throughout the year.

Vegetables are light foods for a healthy diet

The first thing that draws attention in the composition of leafy vegetables or green stem is their high water content and their low fat and carbohydrates content. (See Table 1)

Vegetables contain more than 90% water and fat ranges only between 0.15 and 0.30%. Its carbohydrate content ranges from just over 3% to just over 5%, except Brussels sprouts and artichokes. This determines that this food group can be considered a very light food group.

This large amount of water and its low percentage of calories makes them ideal for dieting and for all those people with problems of obesity.

In addition to these properties, its high amount of water and richness in potassium (see Table 2, right) make them suitable to treat liquid retention. For some people it is very convenient to lose water, such as people with excessive weight, with fluid retention problems due to heart failure, rheumatoid arthritis, gout, renal failure, pregnancy, menopause, etc.

Dietitians recommend a maximum sodium intake of about 2400 mg daily, both from food and from direct ingestion of salt. Most vegetables, except spinach, celery, artichokes and cardoons, have very low or low levels of sodium, so they are highly recommended for those who need to take a diet of foods low in sodium, especially people with hypertension, kidney disease or osteoporosis.

This does not mean that people with these problems can not eat vegetables with high levels of sodium, since those vegetables that have a high sodium level also possess a high level of potassium. In fact it is recommended to eat spinach or thistles to people with hypertension because it has been proven they help lower blood pressure. Artichokes are actually one of the main foods recommended for blood pressure control.

Equally interesting for bloodstream and for control of hypertension are the high proportions of magnesium and calcium in vegetables. It has been found that patients with hypertension also had low levels of magnesium. Calcium, in addition to its recognized value for bone development and prevention of osteoporosis, is important in preventing circulatory diseases and thrombus formation in arteries, as well as and hypertension.

The dark green leafy vegetables are those that contain a highest amount of calcium. These include especially dandelion, amaranth, purslane, borage, spinach and watercress although in the case of spinach, purslane and amaranth, its high content of oxalates are not allowed to absorb all the calcium, so they should not be considered as a good source of calcium.

Vegetables contain a lot of vitamins and fiber

Vegetables contain high amounts of vitamins, especially vitamin C, vitamin A and vitamin B. Vitamins C and A are two of the best antioxidants capable of neutralizing the negative effects of free radicals, which can cause many diseases of a degenerative nature, including cancer.

It has been proved that the ingestion of vegetable food with green leaves can dramatically reduce the appearance of colon cancer. This is due to the antioxidant properties of these vitamins as well as their richness in soluble fiber which increases intestinal transit and promotes a faster removal of feces from the bowel. This determines that toxins remain deposited in the intestines so they are less likely to act on the cells of the intestinal wall and develop tumors in them.

Vitamin A from vegetables is in the form of carotene. These, when ingested, is converted to vitamin A in the body. The properties of this vitamin are very broad. The lack of this element causes night blindness, fatigue, skin or teeth in poor condition, easier to get infections. Vitamin A is necessary for the proper formation of bones and good skin condition, for the formation of red blood cells and to repair injuries suffered by body tissues. Some vegetables such as spinach, besides vitamin A, contain other components such as lutein and zeaxanthin that protect the eyes from vision loss and macular degeneration.

The richness in fiber from vegetables also allows to protect us against colon cancer, prevents constipation and intestinal putrefaction.

Vegetables have a well justified reputation for providing abundant vitamins. An adequate daily intake of these foods and can supply the specific needs of each person, without having to resort to vitamin supplements. (More information on “major vitamins of vegetables“

Vegetables are rich in phytochemicals

Vegetables contain high amounts of phytochemicals. These components, which are carotenoids, as mentioned above, are real “natural elixir of youth” so they help us stay younger for longer by preventing the degradation of our cells. For example, it has been demonstrated that the ingestion of many fruits and dark green leafy vegetables prevents the development of lung cancers. It has been shown that ingestion of plants of the cabbage family (cruciferous) which include the same cabbage, Brussels sprouts, broccoli, etc., help prevent colon cancer. It is known that people who eat plenty of foods rich in flavonoids are up to 30% less likely to suffer some form of cancer.

The main phytochemicals of vegetables are the following:

– Lutein: It helps preserve vision by preventing vision loss. The main foods with lutein are spinach or lettuce.

– Coumestans: Alfalfa sprouts, cabbage or clover leaves are rich in this phytochemical.

– Indoles: Among these the most important are sulforaphane and indole-3-carbinol. The latter helps reduce estrogen, preventing the development of breast cancer. Indoles generally neutralize toxic substances which may be responsible for the development of cancerous tumors. Among the foods rich in these components we have all the plants from the cruciferous family (cabbage and similar plants)

– Chlorophyll: All vegetables are rich in chlorophyll. Chlorophyll, from a food standpoint, has antioxidant properties, helps the liver and kidneys to eliminate toxins and promotes blood circulation by means of lowering cholesterol and triglycerides. It also protects the skin and helps heal wounds and infections. Although not scientifically proven, many people with arthritis and osteoarthritis say they help reduce joint inflammation. It is thought that it may also help fix calcium, so it might be useful in the treatment of osteoporosis. Chlorophyll appears in the green parts of plants, so it is imperative to keep our vegetables tender to prevent this degradation.

– Isothiocyanates: They are present mainly in the cabbage family that, according to studies conducted in France, seem to slow the growth of cancer cells in the lungs, both in smokers and in nonsmokers. Its antioxidant effects are responsible for this property. In another California study, people who ate a lot of Brussels sprouts or broccoli were less likely to develop lung cancer even in front of people who ate other vegetables. It was found that this protection was more effective for people who had a genetic predisposition to this disease, manifested by the inactivity of the genes GSTM1 and GSTT1, which are responsible for producing enzymes that neutralize cancer-causing toxins.

– Ferulic acid: It is a great antioxidant, able to inhibit the growth of cancerous tumors. It stimulates the defense system, protects the liver and prevents attacks of herpes. It is found in spinach.

– P-coumaric-acid: Found in cabbage, cauliflower and spinach, it is able to neutralize the negative effects of nitrosamines. Nitrosamines are components which are formed in our body under the influence of nitrates. Nitrates come from food preservatives added to food to avoid them to be spoilt. They can also come from contaminated food, including vegetables. It has been found that nitrosamines have a negative effect on the body, being able to produce numerous diseases, including cancer.