Home › Medicinal plants › Properties of cabbage
This article was endorsed by Vicente Martínez Centelles - Founder of the web and director. Teacher of natural sciences, expert in plants, natural remedies and botanical photography.

Habitat: In slopes by the sea and cultivated as vegetable under different varieties: cauliflower, brussels sprouts, white cabbage, etc.

Herbaceous annual or perennial plant of the Cruciferae family – up to 300 cm.

Upper leaves sessile; Those on the base much more fleshy, petiolated and with lobules.

Fruits in silique till 8 cm.

Cabbage is a plant that has had a fundamental importance in Europe from the antiquity. Very well-known by The Celts and very appreciated by the Greeks that even served it in public meals and it appears to be mentioned in the scripts of playwrights as Epicarmo (VI C BC) whose characters advised their use to cure diseases.

At the Roman time, it is mentioned by Cato in its work ” De Re rustica” like a remedy for intestinal or pulmonary upheavals and, mainly, to increase milk production in women.

It is very difficult to precise the exactly when cabbage (Brassica oleracea L.) arrived at America, but certainly this plant had a fundamental paper in this continent by the importance that the native people gave the edible wild plants.

In studies made by colonists, few years after the discovery (Bernal Diaz del Castillo, in 1538) revealed as the eatable plants, known like quelites played a fundamental role in the life of the natives.

Nowadays these plants even have a very important value for the population, specially the urban one, up to the point that 300 species of superior plants are considered to be so, using them as curative vegetables, spices and plants.

For the Aztecs these plants still had more importance than they have nowadays. It seems that the conquerors despised these wild plants and were introducing their own ones.

Nevertheless, cabbage was one of the few that were accepted as substitute of the native plants. Throughout the centuries cabbage has even been considered itself as a real quelite itself.

Nicholas Culpeper (1616 – 1654) in its book ” Completes Herbal ” considers it such a valuable plant that says the mixed juice of the same with wine helps to improve the bite of the viper.

Also, among other things, it affirms that, if boiled with a chicken a pair of times helps to release the obstructions of the liver and spleen. He also reaffirms that the good Cato – mentioned previously – did not take another remedy and aims at proven values like its emollient properties as we will later see in the section of its medicinal uses.

– Aminoacids: Alanine (Interesting as it takes part in the production of antibodies); Arginine (Essential in the elimination of ammonia, tissue repairing and muscular construction); Cystine (hormones); Glutaminic acid (Improvement of the mental conditions, prevents schizophrenia and vitalizes the organism); Leucine (infantile growth, balance of nitrogen); Tyrosine (Acts as a neurotransistor and it has much importance in the fight against the depression as well as in the good performance of pituitary and thyroid glands); Sulfoxide of S-Methylcisteine, etc.

– Vitamins: Ascorbic acid (vitamin C, essential in the prevention of diseases like scurvy, playing a fundamental role in the formation of the collagen); Niacin (Vitamin B3) (Metabolism of fats, prevention of the hypertension and reduction of the cholesterol); Folic acid (Vitamin B9)

– Sulfur compounds (glucosinolates): They are responsible for the strong smell of cabbage when it is cooked. (in very elevated amounts, sulfur takes part in the bony growth and the toxin elimination of the body)

INTERNAL USE PREPARATIONS WITH CABBAGE LEAVES AND JUICE

– Diuretic: It aids to eliminate the accumulated liquids in the body, reason why it is effective in diabetes, obesity, uric acid, arthritis, and diseases often associated to the retention of liquids.

In this sense it is related to other foods that fulfill the same assignment, like onion, or celery (Decoction of half an hour with a mixture of tender leaves of cabbage, tender onion and tender celery. Drink the broth at discretion several times a day)

– Stomach ulcer: Cabbage is anti- ulceric because of its glutamine content. Cabbage is one of the best natural antacid and some of the best remedies for healing gastrointestinal ulcers. (Crush some leaves or grind them in a blender and drink ten tablespoons a day of fresh cabbage juice, divided in 4 or 5 times. It can be sweetened to make it more enjoyable)

– Anti-diarrheic: In cases of diarrhea it is suggested to take some cups of the preparation mentioned above.

– Bronchitis: It is anti-bronchial. In order to alleviate bronchitis make a decoction of a cabbage leaf in glass of milk during 15 minutes. Take distributed throughout the meals of the day) the same decoction is useful in influenza, common cold,etc. (4 tablespoons daily of cabbage juice produced by pressing the plant)

– Hoarseness: Like onion juice, tender cabbage juice can be used to combat hoarseness, making the voice more clear and pleasant. (Drink half a glass of cabbage juice with a teaspoon of honey before breakfast).

– Diverticulitisand diverticulosis: Cabbage is rich in arginine (essential in the repair of tissue and muscle), with anti-inflammatory and antacid properties. It has a high content of vitamin C. All this may help prevent infection of the diverticula or lower for infection and inflammation. (100 g of mashed cabbage and drink by mixing the juice with water) (Cabbage juice can be mixed with carrot juice to increase its healing power)

– Hyperthyroidism: It has caffeic and chlorogenic acids, which give it anti-thyroidal properties. The juice squeezed from the plant can help reduce thyroid hormone production. (Squeeze a couple of cabbage leaves and take the juice mixed with a few tablespoons of lemon juice)

– Osteoporosis: for its boron content, it prevents the loss of estrogen that helps set the calcium in bones.

– Anti-cancer: Because of the presence of antioxidans components, it protect the digestive system from cancer. The protective role of these vegetables against cancer is due to its content of sulfur compounds (glucosinolates), which are responsible for the strong odor and pungent taste of these vegetables.

The body breaks down into indole glucosinolates (isothiocyanates). Indoles are involved in the regulation of estrogen and help prevent breast cancer. Scientific studies show that eating cruciferous vegetables frequently protects against various cancers, including lung, stomach, colon, rectum and prostate. 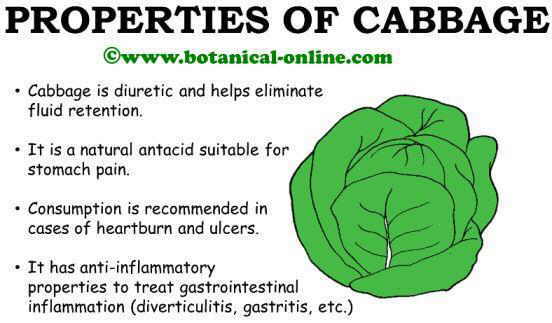 Summary of the main benefits of cabbage.

EXTERNAL USE PREPARATIONS WITH CABBAGE LEAVES AND JUICE

– Emollient: For the affections of the skin; pimples, pustules, blisters, burns, sunburns, cabbage exerts a recovering effect on the skin, specially when it is mixed with just a little bit of olive oil (crush the fresh leaves and apply them in form of plaster on the affected zone of the skin). It can be considered an alternative method to get rid of acne scarring.

– Anti-inflammatory: Cabbage has anti-inflammatory properties. Applied externally it can relieve pain, such as osteoarthritis, joint pain, sciatica, etc (Heat a cabbage leaf and apply it on the painful joint)

The external use of cabbage leaves relieves the pain in the breasts when it responds to inflammation by breastfeeding. (Crush a cabbage leaf without midrib and apply it over the painful area)

– Warts: (Apply the cabbage juice to the wart.)

– Hematomas: (Poultice made with leaves of raw grated cabbage)

As food, it is very interesting, because we can assimilate many of the properties previously mentioned. Given its high vitamin C content, it is very suitable for children or in case of convalescence or diarrhea.

It’s got a very low level of oxalates, so it is good for those people undertaking diet for kidney stones or gallstones diet.

In general, by the amount of vitamins, essential minerals and acids that cabbage contains, we do not have to neglect to eat it as much as possible, When it cannot be taken fresh, we can go to fermented preparations, whose consumption is advised much more than the fresh ones.

We must consider at the time of cooking cabbages that these plant, like all the vegetables, lose most of their vitamins if we extend to much the cooking time, for that reason it is recommenced to introduce them in a container with little water once it has started boiling, not leaving them there more time than the necessary.

We should use cabbage broth to prepare other meals, because most of the nourishing elements have remained in it.The strong scent that this plant displays when boiling is due to the great amount of sulfur that it contains. For some stomachs it is very indigestible when combined with other foods. Reason why it is advisable to take it in combination with other vegetables and in the main meals, not for supper.

Cabbage and the plant foods similar to them, such as Brussel sprouts, broccoli, coliflowers, arugula, etc. are very flatulent. This is the reason why some people, specially those with delicate intestines, don’t like eating them. They are not recommended for liver disease diet. Very strong flavoured vegetal food, such as cabbage, can provoke nausea or vomiting.

The presence of sinigrine or black mustard salt, and other glycosinolates are the cause of intestinal irritations in many people who take much amount from this plant.

Once collected, the leaves of cabbages. must be eaten ender. They can not be used in phytotherapy as dry plants.

Varieties and types of cabbage

Many varieties of cabbages exist, (we are talking about western cabbages) all of them pertaining to the species Brassica oleracea L. that would be the wild plant and from which the other ones derive, forming different groups:

– Botrytis Group, where they would be including the cauliflowers

– Capitata Group, that would be the white cabbages.

– Italica Group, by Broccoli and Calabrian