What is amaranth (Amaranthus caudatus L.)

Amaranth is an annual herbaceous plant or shrub that at maturity can reach 3 meters or more (some varieties are lower than 40 inches): It is generally a common “weed” in the Andean valleys of South America.

Amaranth is a rare plant, due to its rapid growth and ultra-efficient photosynthesis. This plant requires less than two-thirds of current plant moisture, which makes it a valuable plant in those parts of the world where lack of water limits agricultural production.

Etymology: The word amaranth means unwithering, which does not wither and comes from the Greek word Amaranton, “a” (without) and “marainein” (wither).

Habitat: amaranth is native to the Andean valleys of South America and its geographical area extends from southern Ecuador to northern Argentina. It is an herb that tolerates extreme climates and can grow at altitudes between 110 and 3,000 meters above sea level. 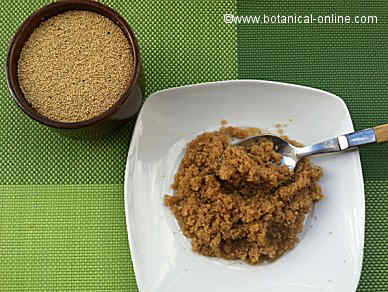 Photo of raw and cooked amaranth

Its primary or pivoting root is short, while the secondary roots branch deeper in the soil. The primary roots can become woody and take a huge size especially when separated from other plants.

Its stem (1) is robust, erect, cylindrical, succulent and fibrous. When matured, the stem becomes hollow inside. It has thick stripes on the outside, and shades of green, red, pink, brown or purple, depending on variety.

At the base of the stem or at mid-height of the plant, some ramifications arise from the axils of the leaves. The number of branches of the plant depends directly on the density of crop plants.

Amaranth leaves (2) are stalked and compound, alternate, rhomboid-shaped, elliptical or oval. Glabrous on both surfaces with pronounced veins. Leaves may be from green-yellow to deep red. Its size ranges between 6.5 and 15 centimeters. In Chile, alternate leaves are consumed at the stage of branching as leafy vegetables.

The inflorescences (3) of amaranth are large, in the form of panicle. The inflorescence can be terminal or axillary. They also vary from being erect or decumbent, and they can offer different colors depending on the variety: yellow, orange, brown, red, pink to purple. The panicle is between 50 centimeters and 1 meter.

Pollination is predominantly autogamous in amaranth. Its flowers are unisexual, small, with stamens at the apex of the glomerulus and pistils. The elegance of the panicle flowering, which features brightly colored, is what gives the English names “velvet flower” and “foxtail”. In countries where the plant is native, its flower are sold and used as an offering on the Day of the Dead.

Amaranth fruits are botanically capsules called unilocular pixidio. At maturity the grain opens transversely, dropping the top (operculum) to release the “urn”, which is the part where the seed is.

The seeds are small, spherical, lenticular, shiny, white, yellow, gold, red, pink or black, depending on the variety of plant. Their size is very small, between 1 and 1.5 millimeters in diameter. The number of seeds varies between 1,000 and 3,000 per gram.

Panicle harvest is done 200 days after cultivation, and is expected to average 81g per plant. The stems and leaves are used for forage, being more nutritious crops for feeding ruminants. 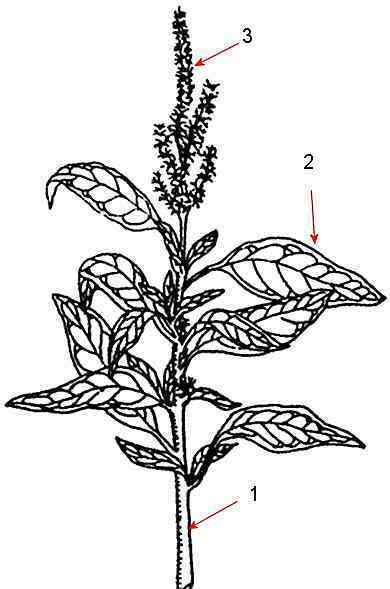 Amaranth is not a cereal

Their pollen is very similar and they are often studied together because of their similarity.

It may be noted as the main difference that perianth of amaranth is dry, membranous, white or red, and the Chenopodiaceae one is usually green.

The Amaranthaceae family comprises over 60 genera and approximately 800 species of annual or perennial herbaceous plants, of which the three main spices that are used for trading in the seed are: Amaranthus cruentus L. and Amaranthus hypochondriacus L., originating in Mexico and Guatemala, and the already mentioned (Amaranthus caudatus L), a native of Ecuador and Peru.

More information on amaranth in the listing above