How do plants feel

Why do plants adapt to the environment?

Plants need to adapt to the environment if they want to survive.

How do cacti have adapted themselves to the place they live?

Cactuses – cactaceae – develop in very dry and hot places, sometimes with annual rainfall averages below 200 mm and with temperatures superior to 45 ºC..

To be able to survive to such extreme places they have had to adapt. Among the most important adaptations we would mention the following ones:

It is the capacity of tissues to accumulate water. As rains in the places where habitually cactuses grow are very sporadic, these plants have had to face the need to store inside them a big amount of water to which they can appeal in periods of drought.

A saguaro (Carnegiea gigantea) of 1 ton of weight is able to weigh up 10 tons after a storm, so that it has absorbed about 9000 liters of water. With this provision it can tolerate up to two years of drought.

The very form of the stems in cacti responds to the necessity of accumulating water. The pleats are a means of getting a bigger surface with a smaller exposition to the sun, avoiding to lose water.

Also, they act as true ” bellows ” allowing the plant to expand when it absorbs liquid. With the result that, after ” drinking” a lot, the show more rounded forms, with no so may angles.

With it evaporation decreases and the plant also protects itself against the attack of the animals,that in many cases are forced to take advantage of more vulnerable parts, as the fruits or the seeds. So, at the same time, these plants also assure the dispersal of the species.

This transformation produces the appearance of some specialized areas in the place where the thorns are born, called areoles, in form of calluses. These areas would be similar to the branches in the rest of the vegetables. 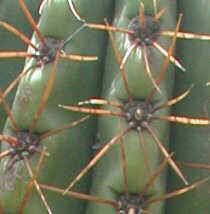 Detail of the thorns inserted on the areoles in Tricocreus validus

The appearance of hairs in some of these plants responds so much to the desire of reflecting sunrays, or to avoid dehydration, as to the intention of being protected of cold nightly temperatures.

Species bearing pubescence usually live in high places where big thermal contrasts take place between the day and the night, just as it happens in the Oreocereus that inhabits the Andean mountains. 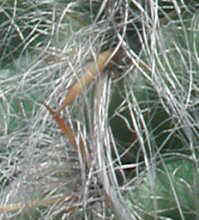 Radicular adaptations (= Root adaptations): Given the peculiar conditions under which rains take place, cactuses have developed a very peculiar radical system. Their roots are not very deep (The water of the rain filters quickly in deep layers, unreachable to these vegetables)

So, since they they have to absorb the maximum amount of rainfall in short time, their roots, although not very deep, extend themselves widely, so that they can cover a big area. The roots of a 15 m tall saguaro can end up extending themselves more than 20 m of distance from the stem. 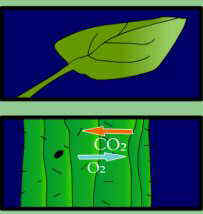 See animation in flash of C.A.M

The particular photosynthetic process that crassulaceae plant, in which cactuses are included, carry out explains as cacti have evolved to support extraordinary conditions of environmental dryness.

Most of vegetables in the process of photosynthesis need to open stomata to absorb carbon dioxide and expel oxygen,with the consequent loss of water because of evaporation.

However, cactuses only open stomata at night, to avoid dehydration. Therefore the exchange of gases is carried out in the darkness. They expel oxygen to the atmosphere and they absorb carbon dioxide that stays inside in the form of acid

(generally malic acid) until the following morning when, in the presence of solar light, carry out the photosynthetic process extracting the carbon dioxide from the acid to transform it into sugar. This process is denominated C.A.M (Crassulean Acid Metabolism) because it was observed for the first time in the crassulaceae

In the same way, cactuses impregnate their stems with waxy substances, esters, with the purpose of protecting themselves from evaporation. The same structure of external tissue, much thicker proportionally than in the rest of the vegetables responds to the same intention.