Home › Botany › Characteristics of meadowsweet
This article was endorsed by Julián Masats - Technical agricultural engineer specialized in horticulture and gardening.

What is meadowsweet (Filipendula ulmaria) ?

Etymology: The term Spiraea refers to its fruits in the shape of a spiral, and Ulmaria refers to the shape of its leaves, which are similar to those of the elm (Ulmus minor).

Habitat: Meadowsweet is a very common plant in swamps, marshes, forests and wet meadows, stream banks, river banks and in general, wetlands and limestone. Frost resistant. It can be found at altitudes up to 1,800 m., In full sun or semi-shade, throughout Europe, temperate Asia, and northeastern North America. 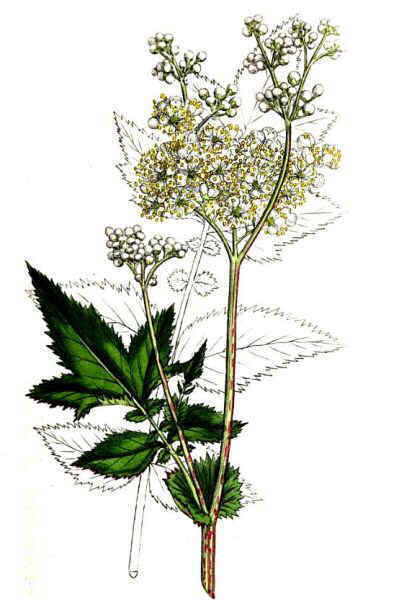 Perennial herb of 0.5 to 1.2m. High reddish stems, erect, rhizomatous. Once established is difficult to eradicate and can form large areas of bushes.

The inflorescence is a cyme, stalked, containing numerous white or cream-colored flowers. Hermaphrodite flowers (they have stamens and pistils), 5 rounded petals and five sepals, numerous stamens.

They are pollinated by bees and other insects, they are very fragrant and attract different wildlife. The meadowsweet is a honey plant.

It blooms from June to August offering white flowers, which rise on top of the stems, stand out above all the herbs of the field, giving it the name “meadows plant” in various languages.

The fruit is an achene 2mm. Twisted into a spiral, it contains a seed inside. The seeds ripen from August to September.

The whole plant has applications.

Meadowsweet does not appear in the ancient treatises of Dioscorides, because it is not a native plant of the Mediterranean basin, but it is more common in parts of central, northern Europe and Siberia. However, meadowsweet itself was known by the Druids in Central Europe, for whom it is known that it was an important and considered remedy for various ailments.

The most active salicylates are in the flowering tops, where the concentration of free salicylic acid is greater. The rhizome is the richest part in gaultherine.