What is a persimmon

Persimmon, Japanese persimmon or kaki (Diospyros kaki) is a deciduous tree of ebenaceae family, where other trees or shrubs and other species of persimmon belong (Diospyros lotus, Diospyros virginiana, etc). They are famous for their fruit or for their black and hard wood such as ebony (Diospyros ebenum or Diospyros celebica).

Eucla is a genus of trees or shrubs belonging to the same family with similar wood qualities.

In most cases trees that are planted are hermaphrodites, so, they have male flowers and female flowers in the same tree. Pollination is entomophilous. The trees are usually pollinated by insects such as bees.

Persimmons reach between 5 and 17 meters high, but usually their height is over 10 meters and its top reaches about 5 or 6 meters in diameter. Leaves alternate, oval, hard, about 13 to 15 cm long, bright green to golden yellow to become the fall.

Female flowers of creamy yellow that spring from the axils of the leaves individually. The male flowers are pink in color and are grouped into groups of 3.

Persimmons belong to the genus Diospyros which in Greek means “divine fire” (Dios = god + pyros = fire). This name is due to the orange or reddish skin and to the great sweetness of the fruit when fully ripe. 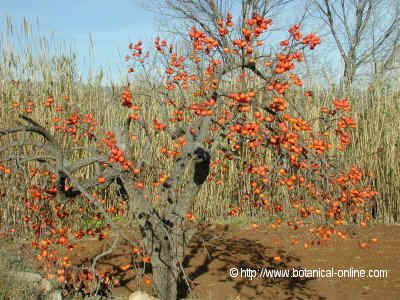 Photo of persimmon or kaki tree

Origin and history of persimmon

Persimmons come from China where its cultivation began more than 2000 years ago, hence is also known scientifically as Diospyros chinensis.

From China, its cultivation spread to other Asian countries. Although in Europe it was known to exist in the thirteenth century through the travels of Marco Polo, its cultivation did not begin to extend until the nineteenth century. At this time, it also began to be grown in America (California and Brazil)

Currently, persimmon appears grown in most warm-climate countries. Japan, China, USA and Brazil are the largest producers in the world. In Europe, we include Spain and Italy. 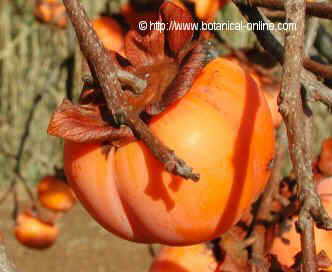 Photo of persimmon fruit. The remaining persimmons ripen on the tree after the leaves have fallen. The astringent fruits are usually collected in late fall or early winter. When collecting persimmons, it is important to cut the stem, leaving the calyx on the fruit (brown cap) to avoid spoilage.

Persimmons are planted mainly with the following purposes:

– Food: Persimmons are grown primarily for its fruits, that are especially rich in vitamin A, vitamin C, lycopene and fiber. (For more information on the properties of persimmons in the listing above)

Used as food, after the removal of their astringency, they are very nutritious and can be used in cooking oils, as dessert or salad. They can also be part of many dishes, like soups, purees, sauces, etc.

– As a medicinal plant: Although hardly used in traditional European medicine, persimmon has been widely used in Chinese medicine with many medicinal properties.

– Timber tree: persimmon wood is similar to ebony. It has a black, very thick and heavy wood, . In many Eastern countries it is widely used in wood carving.

The fruit, also called persimmon, is an oval berry that can reach up to half a kilo. The exterior is smooth, which can vary in color from yellow to orange. Inside, we find the the pulp, with a gelatinous and soft texture.

Pollinated trees produce fruit containing up to 8 seeds. They are bigger and sweeter than those that do not contain seeds, and many can be eaten once collected directly from the tree when they are ripe.

The seedless fruits of flowering trees are only female. The have been produced by parthenogenesis (= They are formed by division of unfertilized female cells).

This type of persimmons contain many tannins , so its taste is more astringent that in fruits that come from pollinated trees. As they mature, they lose part of its bitter taste. However, they must undergo a process of elimination of astringency by using chemicals or cold to be edible.