What is a pomegranate

Botanical name: Punica granatum. The generic name comes from the Latin Punica (= Phoenicians), since the Phoenicians were the people who grew and spread the cultivation of this tree all over the world. Granatum comes from Latin granatus (= grain), referring to the edible grains of pomegranate fruit. 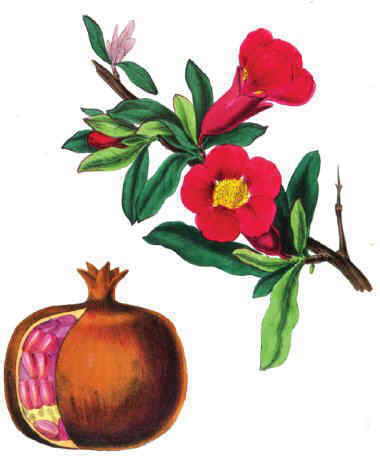 It reaches between 8 and 5 meters high if grown in the ground and much shorter, when cultivated in pots or containers. In this case, id does not usually exceed more than 1 meter.

Bright red flowers, each consisting of 5 petals with tube-shaped corolla with the lower lip more elongated than the superior one. There are varieties with flowers that have whitish shades

The fruits, called pomegranate, are globular berries with lower hillock. They are covered by a reddish-brown skin with leathery texture.

Pomegranate fruit seeds are under this skin. They are grouped within several separate cavities (cores). The seeds are surrounded each by a semi-transparent shell pink-red pulp (sarcotesta) which constitutes the edible part of fruit. (Dwarf species grown in pots have inedible fruit)

– Tree with edible fruit: The pomegranate tree is cultivated as a fruit tree preferably because of its fruits (pomegranates), which are its fruits, which are edible. Equally, from fruit pomegranate, juice is obtained, which is very detoxifying and refreshing in summer.

– Alcohol: The pomegranate is part of the composition of some alcoholic beverages, such as “Punch Granada” that is produced in parts of Mexico.

– A garden plant: The pomegranate can be grown as a small garden tree or shrub for its beautiful red flowers and attractive fruits. In autumn, flowers become very decorative. One of the countries where pomegranate grow in gardens is Japan. In this country, many specimens of this plant can be seen in gardens or squares. (See details of cultivation)

– Medicinal: The bark of the fruits, roots, fruits, flowers and leaves of the pomegranate have been used and are still being used for its medicinal properties. The pomegranate tree is considered a very outstanding astringent with antioxidant properties