Home › Food › Nutritional benefits of pomegranate
This article was endorsed by Elisenda Carballido - Dietitian nutritionist. Postgraduate in Phytotherapy and master in Nutrition and Metabolism.

Pomegranate is also a tree, and this tree produces a series of substances with medicinal properties, which not only reside in the fruits. We can use its roots, stem, leaves, fruits,..Depending of the part of the tree, we will have different medicinal properties.

For centuries, the juice of pomegranate fruit has been used as a treatment for intestinal problems. But, this is not the only application that is known.

For example, in parts of India, the white and bitter parts of the center of the fruit are used with salt, pepper and ginger as a toothbrush. In this way, they achieve oral hygiene and, due to its antibacterial effect, they protect the their gums against gingivitis. 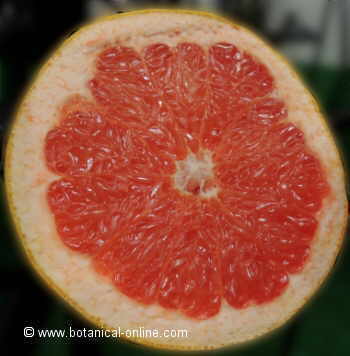 Photo of pomegrane, showing the inside

In Ayurvedic medicine, different parts of pomegranate tree and pomegranate fruits are used for different applications. For example:

Properties of the bark of the pomegranate

From pomegranate seeds we usually extract oil which is very rich in various acids, (ellagic acid, citric acid and malic acid,…) and some sterols. Some studies have attributed anti-inflammatory properties to this oil.

Properties of the flowers of pomegranate

The flowers of the pomegranate are rich in various kinds of organic acids. Sometimes flowers are used as astringents, in case of diarrhea, as well as in external skin applications.

In internal use, in the treatment of diarrhea, it is used as a decoction (pour 1l of water on 30g of dried flowers and letting it boil 5 minutes. Take half a glass a day).

Pomegranate flowers have also been effective in treating headaches and even migraines.

Regarding external applications, the use of flowers may be helpful in maintaining a good oral hygiene, protecting against caries and gingivitis. (They are used as a tea: pour 1 liter of water on 50g of dried flowers and let stand for 30 minutes. Perform rinses with this liquid)

Properties of the leaves of pomegranate

The leaves of the pomegranate are rich in tannins and flavonoids such as apigenin and luteolin. Its use could help reduce anemia

Some studies have attributed tumoral inhibitory effects to the consumption of pomegranate juice in conjunction with extractions of the root bark of the pomegranate.

A preparations of pomegranate safe?

Pomegranate, being rich in tannins, is not free of toxicity and it should be used properly. (More information)

More information on pomegranate in the listing above