How to grow summer squashes 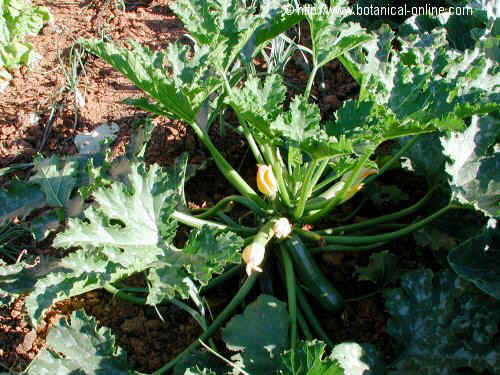 Summer squash (Cucurbita pepo subsp. pepo) is a type of pumpkin, a plant of the Cucurbitaceae family, the same family to which the oher pumpkins, melons or watermelon belong.

Summer squash is a plant native to America, which was arrived in Europe at the beginning of the 16th century.

Within the general term of summer squash, there are many plants of the same species. Among them the most important ones are:

Zucchini variety was created in the North of Italy. Zucchini is an American English term, whereas courgette is the British English term.

The same fruit when completely developed is know as marrow.

Stem cylindrical and rough to the touch, divided into internodes.

Leaves petiolate, large, webbed, with five lobulations, green and with harsh villi in the lower part of the limbus. Toothed margins.

In general, the fruit is harvested before ripening, when it is considered that the texture and the organoleptic qualities are more pleasant; and when their seeds have not yet been formed.

Climate and conditions for the cultivation of summer squash

– Sensitive to cold, temperatures below 8ºC can damage the plant and even stop its development.

– It does not tolerate alkaline soils, in which it can develop symptoms of nutrient deficiency.

– Summer squash is a crop that requires soils rich in organic matter.

– Fertilize with manure or compost.

– Summer squash is a horticultural crop with clear demands for periodic irrigation, especially in the growing season of the fruit.

– It is important that no puddles are formed, and not over watering, as it may favor the appearance of diseases, rot or suffocation of the roots and consequent death of the plant.

– On the other hand, a lack of irrigation will cause damage to the plant, such as falling flowers, small fruits or dehydration.

– A drip irrigation system is recommended. An alternative is to make small holes in a hose, and activate the water at low power.

Summer squash is propagated by seeds. This means doing the following steps:

How to sow summer squash

Seeds are sowed in a protected nursery or in the land field that we have prepared, depending on the weather. Summer squash can be planted in late winter or early spring, between February or May. The sowing of the summer squash takes place on the days of full moon or ascending moon.

When and how to collect summer squash

Collection time may vary depending on the variety and climate. Generally, it is done when fruits have not yet fully matured, approximately 50 days after sowing:

Precautions: the skin of the summer squash is very soft and sensitive to shock, it tears easily. We must stack them and manipulate them delicately.

In winter, the plant stops producing fruit. The leaves and stems of the plant can be used to fertilize the soil.

How to obtain seeds from summer squash

Summer squash is a fruit that is generally consumed immature, that is to say, when it has not yet formed its seeds. It is even consumed when it measures just over 10cm. and it’s still in bloom.

In our garden, we will try to select , from one or more of the most vigorous plants, a pair of courgettes to ripen and produce seeds. The seeds will serve us for the next harvest.

Apart from a correct watering and weeding, we have to take into account the following maintenance tasks:

Diseases and pests of summer squash

The main pests and diseases that affect the summer squash are:

This plague can be prevented by wetting the underside of the leaves of the plant with potassium soap or even with a little clay. If the pest is already existing, we will use specialized insecticides, preferably ecological.

Characterized by white spots on the leaves. There are preventive remedies easy to acquire in specialized gardening stores.

– Fruit: summer squash is a soft vegetable, with high water content, which makes it a low-calorie fruit, ideal for weight loss diets.

It is also ideal for people with diabetes, because of its low sugar content.

It does not contain almost sodium, so it is suitable in diets for hypertension, when it is not cooked with salt.

It is a moisturizing vegetable, which lubricates the intestines and helps fight constipation.

How is summer squash eaten?

It is cooked as a vegetable in stews, stews, stuffed (stuffed summer squash), for dumplings, batters, creams and ratatouille.

Summer squash flower is also consumed, in sautéed or stuffed.

– Nasturtium: cultivation because of its edible leaves and also used to control pests.

It is NOT recommended to associate summer squash with potatoes