Home › Education › Parts of trees
This article was endorsed by Vicente Martínez Centelles - Founder of the web and director. Teacher of natural sciences, expert in plants, natural remedies and botanical photography.

The main parts of trees

A tree contains the following parts:

– Root: is the part of the tree that remains underground. Its main function is to hold the tree and absorb water and minerals from the soil. Most trees have one main root from which secondary roots emerge.

Some trees have special roots with a different purpose such as adventitious roots, which may arise from the trunk, branches, leaves or dead branches. This is the case of the aerial roots of ficus or mangrove trees. In the first ones, roots spring from branches and stems and they look for the soil to secure the tree. In the second ones, some special roots grow out of the water and possess breathing holes to take the air.

Other trees produce Some roots extend as a series of buttresses from the base of the trunk to give them more support. This type of roots is quite typical of many tropical trees.

– Stem: The stem is the tree structure that separates the roots from the crown, where the branches and leaves are. In the case of trees the stem is called a trunk. The role of the trunk is to separate the leaves from the roots and transport crude sap from the ground to the leaves and the elaborated sap produced by the process of photosynthesis. Tree trunks,unlike the stems of herbs, contain a tissue commonly called wood. The stem or trunk of trees grows every year. This growth can be continuous, in tropical and subtropical zones, and only during the appropriate period (growing season) in trees belonging to temperate or cold zones.

The stem is formed by two different types of tissue: phloem that forms the rind and the xylem, which forms the wood. These two types of tissues constitute a number of ducts called vascular vessels. The xylem is responsible for transporting the crude sap – minerals and water – to the leaves. The power that drives this transport is caused by water evaporation in the leaves and the suction force exerted by the roots. The phloem is responsible for transporting the elaborated sap or nutrients produced or obtained by photosynthesis to all parts of the tree. Its constitutes the inner layer of the cortex.

According to the growth of stem we can distinguish two types of trees:

– Trees with exogenous growth: Most of the trees belong to this type of growth. This growth is performed by addition of new wood over the old one. We can say that the tree is expanded outward. When this growth occurs in areas with seasonal changes, increased diameter trunk is manifested in the form of growth rings that can be distinguished by its different color and hardness. In regions with no seasonal changes, growth is uniform and no rings are formed. In temperate or warm zones with one seasonal period – wet or dry- only a single ring of growth is produced each year. In warm areas where there are a couple of dry or warm seasons, the trees produce two growth rings each year. In very dry or desert areas they are produced only after rain periods.

– Leaves: They are one of the most important parts of the trees since they are responsible for carrying out photosynthesis, respiration and plant transpiration. Some trees hold their leaves on the tree throughout the year.. This type of trees renovates leaves constantly without being apparently appreciated and the tree crown is always plenty of them. We call them evergreen trees. Other trees drop all their leaves in a certain period of the year and the crown remains bare until new leaves are born. They are called deciduous trees.

– Branches: Branches are the side shoots that originate from the buds. The development of buds will produce shoots with leaves whose growth will lead to a full branch. Depending on how a branch growth occurs we speak about different types of branching.

We distinguish two types of trees:

The growth of such trees is caused by elongation of the main stem from the primary bud. From the main stem side branches will develop, shorter and thinner, almost in right angles. Because this type of growth, these trees are characterized by more or less triangular shapes. This type of structure, characteristic of the conifers, is an adaptation to the climate where they live. This peculiar shape can rid them of from the excess of snow, which ultimately will break the branches.

Most trees are simpodial. It is called so when there is not a main stem that extends through the end of the tree, but two or more main branches arising from the end of the trunk from axillary buds (2) and not from the terminal bud (1). From lateral branches some other ones are born, starting from the end by means of lateral buds. In this kind of growth the branches are formed from different buds. Thus, such a tree type becomes more globose more similar to the shape of an umbrella. This type of structure allows a greater number of leaves can capture sunlight better. 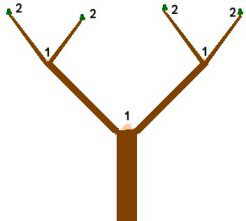 – Flowers: Flowers are the sexual organs of the trees. Most of the trees are hermaphrodite, ie they contain in the same sample flowers with both sexes in each flower. Sometimes the male flowers are separate from female ones within the same tree, as occurs, for example in the alder. Such trees are called monoecious. There are species of trees that have only samples which produce male flowers and other samples with only female flowers. Such trees, such as holly, are called dioecious. There are also polygamous trees when trees contain within the same species hermaphroditic samples along with other purely unisexual, like cinnamon. Subdiocious trees are those that contain dioecious and monoecious samples in the same species.

Except in some very specific cases, tree flowers of a tree must be pollinated to produce a fruit. Pollination is the transfer of pollen from the male part of the flower to the female one. Pollination allows pollen to enters the female egg and fertilize it. Pollination can be carried away by different pollinators. Fertilization involves the growth of the carpel walls and the transformation of ovules into seeds. . Thickening of the carpel is going to produce a fruit.

More information about trees in the above listing.