Home › Food › Characteristics of lentils
This article was endorsed by Elisenda Carballido - Dietitian nutritionist. Postgraduate in Phytotherapy and master in Nutrition and Metabolism. 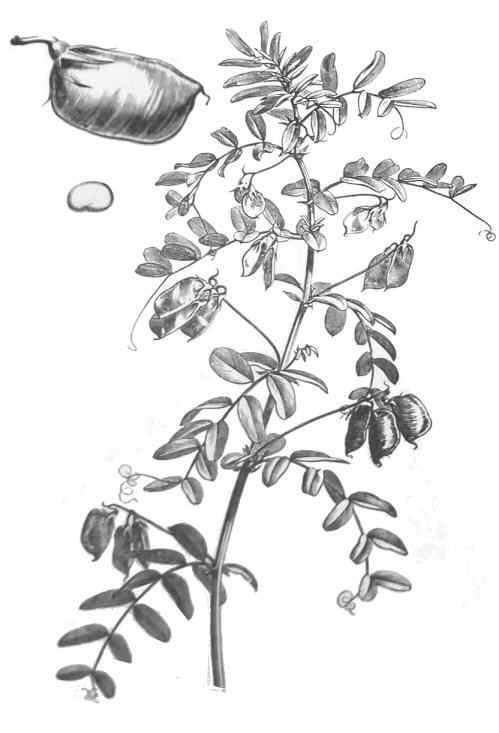 Drawing of this plant. In the superior part, on the left, a detail of a fruit and a seed.

A lentil (Lens culinaris Med = Lens esculenta Moench) is a plant of the Papilionaceae family, the same family where there are trees as well known as carob tree or grasses such as clover.

Beans, or peas are also plants of the same family used by the food value of the seeds enclosed in their fruit pods.

A lentil plant is an annual herb up to 75 cm tall.

Leaves compound, alternate, provided up to 7 pairs of oval leaflets without petiole.

Flowers of different colors (white, pink, purple, etc.) gathered in groups up to 4 on long stems.

The fruits are pods from 1.5 to 2 cm in length within which there are two flattened seeds about half a cm wide also called lentils, that are edible.

It is a plant that is cultivated in many parts of the world, although is can also be found in the wild because it has become feral

Origin and history of lentils

It is unclear the real origin of lentils though some historians put it at the Far East, southwestern Turkey or northern Syria where they seem to be collected along with other wild plants such as oats. Apparently in these areas even today you can find the species in the wild (Lens culinaris subsp. orientalis).

No one knows exactly when they started to be grown. The first remains of lentils have been found in excavations in Syria for more than 11000. In this case, they consist on collected seeds from wild plants.

When were lentils cultivated for the first time?

Found in archaeological Turkish remains (excavations Halicar), lentil seeds were cultivated about 5500 BC, but the oldest remains of cultivation dating from 6600 BC and were found in Israel which makes them one of the most ancient food cultivated by man almost 9000 years ago.

They were widely used by the Egyptians who considered them a staple food, along with beans or wheat. In Egypt, its richness in proteins greatly helped the slaves who built the pyramids. It is known that Egypt lentils were dark red and small. Geshem, later known as Facusa, was an Egyptian city that was called the “city of lentils.”

Lentils in the ancient times

Later, they were used by the Greeks and Romans. Romans dried and kept them in their pantry for the famous Roman lentil soups available along all year.

Lentils were eaten by people throughout the Middle Ages.

However, as we move toward our days, lentils were losing their reputation in favour of peas, and were relegated to a commonly used type of food for the poor or during times of scarcity. Often this legume has been used to feed livestock, especially pigs.

Today, they are mainly grown in the Far East, North Africa and Europe. On Europe, they can be found in all countries bordering the Mediterranean. Along the Atlantic coast, lentils cultivation expands from southern countries till Germany.

Among the wild species of lentils we must consider the following:

There are many varieties of lentils grown. Among them we could mention the following according to their size and aspect:

Production of lentils in the world

The main producers of lentils in the world are, in order of production, India, Canada, Turkey, Syria and Australia.

Although India is the country that produces more lentils, all the production is for domestic consumption and still needs to import more lentils from abroad to meet their needs.

Canada is the largest exporter in the world. Other exporting countries are Turkey, United States, Syria and Australia.