How many kinds of oranges are there?

There are about 300 varieties of oranges. Of these, about 30 can be usually found in the market. The main types of oranges are:

They are so called because they have a kind of human navel mark on one side, as a result of an underdeveloped fruit growing in contact with the main one.

These oranges are characterized by their sweetness and by the fact of having few or no seeds.

With a lot of juice, a very thick skin and a pulp with yellowish color, there are very early varieties of them that may be available from November until February.

There are later varieties that can be harvested until early spring. Navel oranges are produced in the Mediterranean, mainly in Spain and Morocco. The Navel market that are sold subsequently come from Australia, California and South Africa.

They are used as table oranges. Within this group, the best known are: 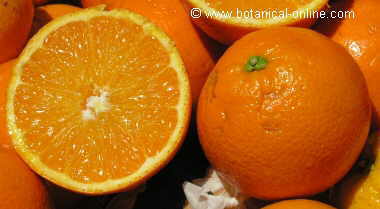 They are used both, for eating and for juicing. They do have the typical navel mark on the peel that characterizes the previous group and, in many cases, have seeds.

Among them, the most important are:

They are those with reddish meat and juice because of the existence of pigments (anthocyanins) that need cold to activate. These colors in some varieties also appear on the skin. They occur well into the winter. Among these we have: