What is an orange tree (Citrus x sinensis) ? 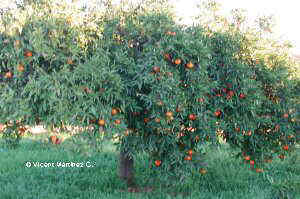 Photo of an orange tree with oranges

An orange tree is an evergreen tree up to 10 meters high, with very rounded crown. It has slightly thorny stem.

Leaves leathery, elliptical or ellipticolanceolate, acute and with a petiole provided with narrow wings.

The fruit (orange) is a hesperidium with fairly smooth bark and sweet or sour taste, not bitter.

Orange trees belong to the Rutaceae family, a very large family that contains about 1,700 species of plants growing in countries with warm and mild climate, being the African continent where more species can be found.

Within the Rutaceae family, the most famous citrus plants are species that are included in the genus to which orange tree belongs.

Citrus plants are mainly characterized by their large fruits that contain copious amounts of citric acid, a compound with formula C3H4OH (COOH) 3, which is what provides the characteristic sour taste.

In addition, all members of this genus contain other components that give them very deep aromas. For example, orange flowers are known for their particular fragrance, the scent of orange blossom.

Other non-citrus species of plants belonging to the Rutaceae family are well known herbs, such as rue (Ruta graveolens), burning bush (Dictamnus albus) or decorative shrubs such as Japanese esquimia. (Skimmia japonica)

What are the main citrus fruits? 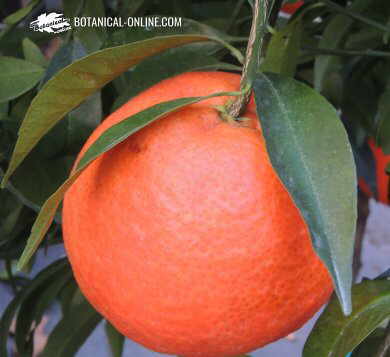 Detail of an orange, hanging from an orange tree branch, with leaves.

Oranges come from the south of the Himalayas and southern China, where wild species have been found with much resemblance to cultivated ones.

Although it is known that it was Alexander the Great who introduced most citrus in the East, it is not known exactly who introduced oranges into Europe via the Far East. There are different theories that point to Genoese merchants, others to Crusaders. All that is known is that the Portuguese did it in the sixteenth century.

Oranges were brought to America on the second voyage of Christopher Columbus.

The Arabs introduced in North Africa and Spain in the tenth century, both in Andalusia and Valencia, where oranges have reached international fame of high quality.

Orange production in the world

Oranges, with 70 million tons produced worldwide, is the most consumed fruit. They represent the third crop in extension after bananas and grapes.

Today they are grown in any of the continents, provided they have a favorable climate, including abundance of sun, water and low humidity.

The world’s largest producer of oranges is Brazil, which spends most of them in its domestic consumption and production of orange juice. Brazil would follow United States and China. United States has very large crop fields in Florida, California, Texas and Arizona.

Spain is the largest producer in Europe and the leading exporter of oranges in the world. Other producing countries are, in order of importance, Mexico, which has increased its production greatly in recent years, Italy, India, Egypt, Israel, Morocco and Argentina.

Properties and uses of orange 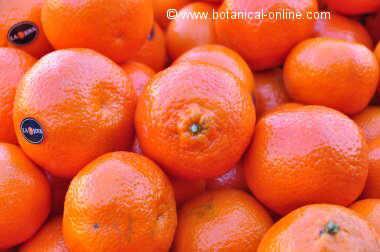 Photo of oranges, noted for its intense orange color

From orange tree people do not only take profit of oranges. This tree produces series of products that are used by the industry:

Can eating oranges be dangerous?