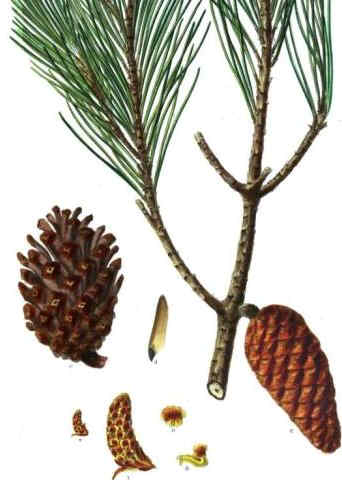 Drawing of the leaves and flowers and pine cones

Habitat: It can be found throughout the Mediterranean area from sea level to about 200 m altitude, reaching 1000 meters in the south of the peninsula and even 1,700 meters in mountainous areas of Morocco and Algeria. It extends from North Africa, southern Europe and Turkey to the Black Sea.

It has been planted as an ornamental in other places of the world like California and southern Australia, were it has become a naturalized plant.

Aleppo pine is the wild tree par excellence of all the lower area of ​​the Mediterranean. Probably it was not as widespread in the past, when many lands, where they are living today, were occupied by forests of oaks. Degeneration of these areas and the large repopulation with this species has resulted in this tree becoming the most widespread and abundant in the lowlands of the Mediterranean area.

It is the most planted tree for timber production in this area. It supports very well the heat and high temperatures. It is a disputed species because of its richness in resins enhances combustion so it is very conducive to suffer fires. 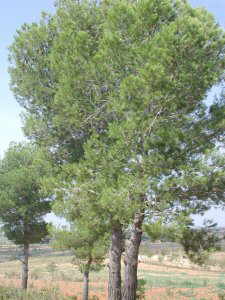 Evergreen tree of the Pinaceae family up to 20 m, but usually less tall.

Stems with silvery whitish bark in youth, but darker and red tones when it reaches maturity. Bark cracks over the years.

Leaves between 5 and 12 cm, needle shaped, with one millimeter thick. Generally in pairs, sometimes three. Pine cones up to 12 cm long and 4 cm wide, clearly conical, with curved stems.

The seeds (pine nuts) are NOT edible. It differs mainly from the rest of the pines by its narrow leaves and by the curvature of the stems of pine cones. 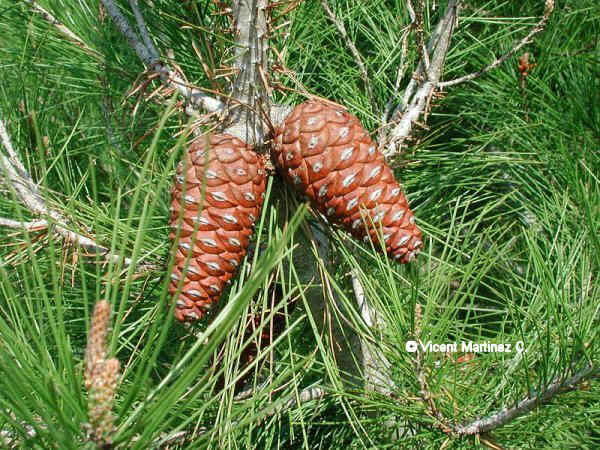 Today Aleppo pine wood is considered a very twisted and very poor quality wood. This seems to respond to a historical reason: over-exploitation of forests in the past.

Aleppo pine, along with oak (Quercus robur), has been the most widely used since ancient times for the production of timber trees. Apart from the usual consumption in private households, this wood was already commonly used by the Carthaginians and Romans to build their boats. Natives from this area melted the metal with which they made their weapons with Alleppo pine wood.

Besides, this wood protected mine galleries of silver copper and lead, especially those located in the southeast of the Iberian Peninsula.

The Arabs also used much wood of Aleppo pine for the production of wood and tar with which they built and sealed their boats.

During the Middle Ages, many oaks and pine trees were felled to get free land for agriculture and livestock, as well as for the production of charcoal. Not least important the great production of wood for building ships going to America during the sixteenth and seventeenth centuries.

The Industrial Revolution led to a new exploitation in the nineteenth century to use wood and coal as energy source, after the forest seemed to have recovered somewhat during the thirteenth century.

All this long process has led to overexploitation of pine forests, as, according to many historians, who have been reporting over the centuries, has practically decimated the soil where forests once grew splendidly.

In the twentieth century the quality of Aleppo pine forests was so low that, thereafter, its wood has only been used practically as a fuel or to produce wood of poor quality, suitable only for certain uses such as railway sleepers, scafolding or packaging. Thus, although abundant, as a consequence of this overexploitation, Aleppo pines usually do not provide good quality wood. Their place has been taken by others more suited to this task, as Scots pine (Pinus sylvestris)

Aleppo pine for the production of retsina

Resitna is called a kind of Greek wine with denomination of origin made from wooden barrels sealed with resin of Aleppo pine.

The resin can isolate the wine from the air so as not to become soured and, at the same time, this method provides the characteristic bouquet of this wine.

Allepo pine resitna was already known by the Romans and it is still well known and appreciated today.

Its properties are similar to these of Scots pine. The main ones are the following:

Other species of pines with similar medicinal properties to Aleppo pine

In addition to Scots pine, there are other pine species with similar properties. Among all. we will mention the following: