Conifers are woody plants. Most are in the form of trees, although there are quite a few shrubs or bushes.

Their leaves usually have the form of needles or scales and are evergreen, except the genus Larix and Taxodium which are deciduous.

Conifers are gymnosperms plants that produce seeds in female cones (pine cones or galbuli), formed by scales arranged around an axis. The female cones on the outer scales contain one or several scales that carry the ovules. These, after fertilization, become seeds. 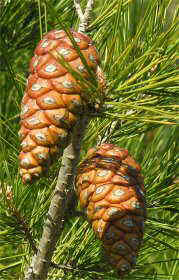 Pollen is found in male cones born at the end of young branches of the year, usually in winter and matured during the spring months. Male cones are smaller because they can be between 2 and 12 mm in length.

In the most primitive trees, male cones are isolated or poorly assembled, while in the more evolved species, such as pines, form a kind of cluster. Each cone has a number of scales that contain large amounts of pollen. In spring, when wind moves the branches of conifers, if the flowers are mature, they will expell a cloud of pollen.

Most species are monoecious, That is to say, reproductive structures appear in the same tree, but we also have other dioecious species as Araucaria, with male trees and female trees in separated plants

They were extremely important in the past occupying areas that today are dominated by angiosperms. Their little ability to adapt to temperature rise which has gradually been experiencing our planet has mostly relegated them to cooler areas, where they form great forests today, in places where most flowering plants have not still been able to adapt.

Although the number of species of conifers is very low comparing with angiosperms, its high amount in some areas of the world as well as its economic importance in the production of wood and paper pulp, makes them a well-known group. 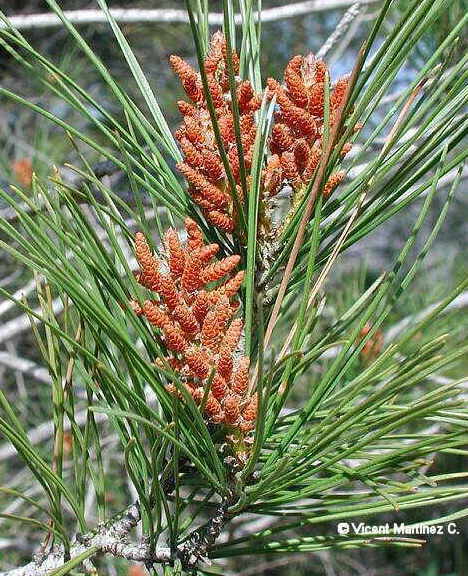 Conifers are divided into:

Where do conifers live? 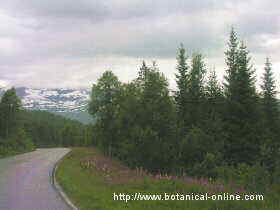 Wood of conifers in Scandinavia

Conifers are located mainly in the northern parts of America, Europe and Asia between 50 degrees and 65 or 70 degrees north latitude in the area known in Europe and Asia as taiga, forming the most extensive forests on the planet. (Forests with evergreen needle leaves).

Above this area appears the shrubby tundra, where bryophytes dominate along with some shrubs such as arctic willow (Salix artica) or the dwarf birch (Betula nana).

In Europe and North America, at the south of these forests, deciduous forests consisting of beech, oak, linden and ash make its way. Within this area we also have a very characteristic conifer, the yew.

As the weather becomes less extreme conifers are progressively replaced by birches and subsequently by the trees mentioned above.

In Asia, below the vegetation of conifers, we find a steppe zone in which mainly grasses live .

Other conifers are located in more southern latitudes with temperate or warm climates. Particularly noteworthy temperate coniferous forests that are found only in certain areas of the world with hot summers and cold winters with a very high rate of rainfall. 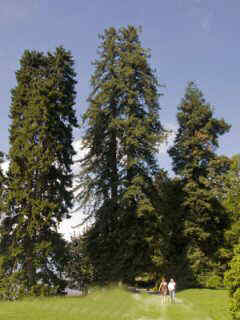 Among these, the most important are the forests of red California redwoods (Sequoia sempervirens) or giant sequoias (Sequoiadendron giganteum) with samples so bulky as General Sherman. 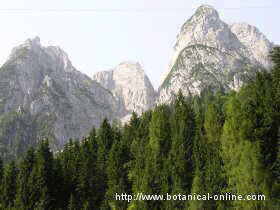 Photo of fir forest in the Austrian Alps

No less important are the forests of Douglas fir (Pseudotsuga menziesii), also called Douglas pine, in the northwestern United States.

In southeastern of South America in Chile and Argentina, larch woods or forest grow, formed by the lahuán (Fitzroya cupressoides) with similar trees to larch (Larix) that can exceed 50 meters.

In northern New Zealand there are forests of kauri (Agathis australis). These trees have very thick trunks, highlighting the so-called Lord of the forest that reaches 4 meters in diameter. They are characterized by their high trunks devoid of branches that constitute a real tourist attraction. They grow in a very humid environment with podocarps (Podocarpus) other conifers.

How are conifers distributed?

Firs are the dominant species in many northern regions, such as Canada, United States and Siberia. In addition, we can find conifers as the dominant trees in mountainous areas or even warm temperate climates, where weather conditions resemble cold northern areas.

In warmer southern places we can find conifers, especially pinaceae, from sea level. In these latitudes, pines can be the dominant species in the forest or they form part together with other species. However, the appearance of these conifers, as we shall see later, is different from those found in colder areas.

In general, in the northern hemisphere there are conifers belonging to the Pinaceae, Cephalotaxaceae and Taxodiaceae, while Araucariaceae and Podocarpaceae and are distributed primarily in the southern hemisphere. We can also find Podocarpaceae in East and Central America. The most extended family is Cupressaceae that can be found in both, North and South latitudes.

Most northern conifers are adapted to the climatic conditions of cold areas because they are able to withstand low winter temperatures often exceeding -40 ° C. The main problem with these plants is that, when winter comes, the ground freezes, so trees can not absorb water, as a result, in practice, it is as if they lived in desert areas.

Conifers have adapted to the limited availability of water, the cold hard winter and the short duration of the vegetative period. Among the main adaptations of the leaves of these plants we should include the following:

In areas with very dry summers the evergreen conifers are also advantageous to resist drought. 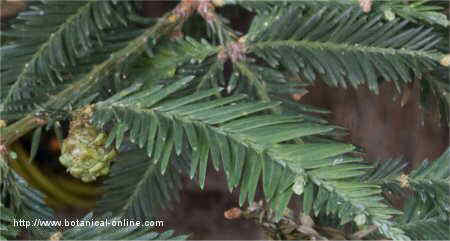 Leaves and cones of secuoia

Most conifers have needle-shaped leaves, so the whole area of a leaf, compared with evergreen leaves, is smaller. Consequently, it can uphold less weight on top. A typical evergreen accumulates more snow, so it will break more easily with its weight.

The surface of a coniferous leave is small, so that it contains less sap and, therefore, it has less liquid to freeze when cold. Its lower surface provides less exposure to solar radiation, which determines a lower evaporation. 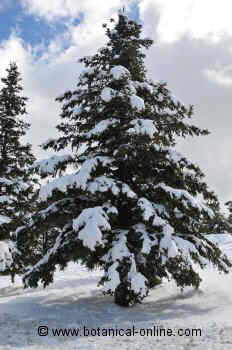 Fir tree with snow (Abies alba). The pyramidal shape of this tree is an adaptation to the snow

In addition to the leaves, the general shape of conifers is adapted to snowfall.

Its pyramidal shape and its branches inclined downward facilitates the sliding of snow to the ground so that the snow weight does not spoil the tree.

This same reason explains why conifers located in hot areas do not have the same structure, but they have a more open and wide one and branches are directed upwards. They have no need to get rid of the snow and at the same time, its most extended form allows them to capture more light.

Just compare the pyramidal aspect or a fir (Abies alba), with that of an Aleppo pine (Pinus halepensis). Even more, look at a stone pine (Pinus pinea) of the photo below with its typical form of umbrella to realize how these two species are adapted to the places they live at. 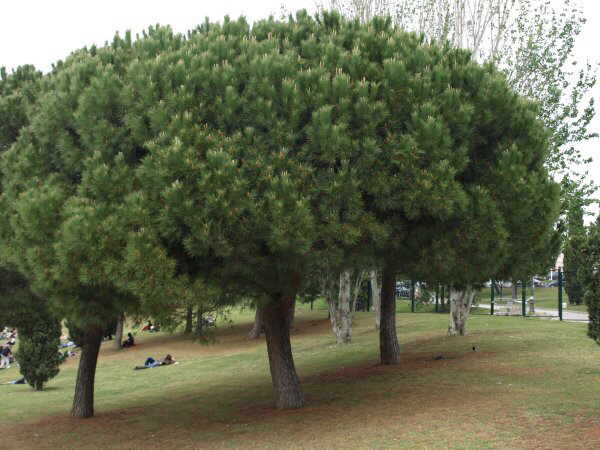 Stomata in the leaves of conifers are adapted to lose the minimum, both because they have a smaller amount than other plants, and because they are protected inside a kind of groove in the underside of the leaf. This groove is filled with air and forms a layer that reduces evaporation.

Conifers are better adapted to fire than most plants. Even fires favors them to eliminate competition from other species.

To adapt the fire, many of these plants have developed a thick crust that prevents the fire to burn the vital tissues. Among the best known and adapted is the Canary Island pine (Pinus canariensis) whose trunk and branches are covered with a thick layer capable of isolating the inner layers. Even if the trunk is affected, this tree can sprout from the ground or regenerate the damaged parts from special fabrics that are not found in any other conifer trunk.

Other conifers do not have this capacity, but their regrowth is also favored by fires. Many pine and cypress trees have cones that remain closed until the heat of a fire opens the pine cones and ejects the seeds.

Expelled conifers seeds can grow in an area where the fire has eliminated competing species. Many soils are even more productive after the fire, because heat breaks down leaves and extracts components that enrich it.

Thus, natural fires caused by sunlight or storms in many places have favored the presence of vegetation where conifers predominate.