Which are the vegetables with the highest anticancer properties?

According to numerous studies by the National Cancer Institute in the United States, foods from the cruciferae family (Cabbages, Brussels sprouts, broccoli, cauliflower, turnips, radishes, mustard greens etc) are the most suitable ones to prevent cancer.

Among all of them broccoli seems to be the strongest one. This is due to a number of components that appear in all these plants and which are particularly abundant in broccoli 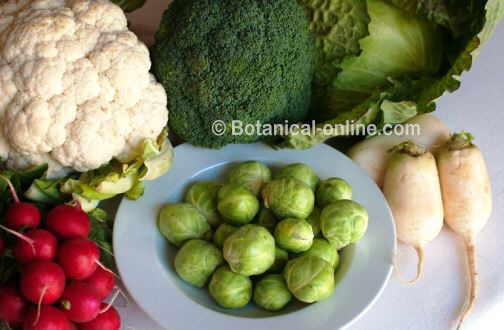 Anticancerous components of broccoli and other similar plants

The most important anticancerous components are the following:

These include sinigrin which becomes allyl isothiocyanate when ingested by the action of the enzyme myrosinase.

Allyl isothiocyanate can produce large lesions in the digestive tract of herbivores when eaten in large quantities. It provides broccoli with the characteristic pungent taste in the same way than it appears in mustard, Brussels sprouts or horseradish.

Most interesting of all is that this phytochemical can stimulate anticancer enzymes in our body so it is able to prevent the growth of precancerous cells in the digestive system, such as stomach cancer stomach or colon cancer.

The process that prevents cancer development by not allowing precancerous cells to develop is called apoptosis. It has also been shown that isothiocyanates help lower cancers caused by the smoke of tobacco, such as oral cancer or lung cancer.

Other components derived from indole glucosinolates are acting to protect the body against those cancers caused by hormonal causes such as breast cancer or prostate cancer.

Nitrosamines are components that are formed in our body under the influence of nitrates. Nitrates come from food preservatives that are added to foods to avoid spoilage. Nitrosamines can also appear in contaminated food. It has been shown that nitrosamines have a negative effect on the body, being able to produce numerous diseases, including cancer.

It has been shown in animals that the intake of sulforaphanes is very useful to avoid the development of colon cancers and liver cancers.

Dithiolthiones are other phytochemicals derived from glucosinolates able to cleanse the body of potentially carcinogenic substances. It is believed that these components are able to eliminate aflatoxins that are harmful substances present in meat, dry fruits or nuts in poor condition.