How to prepare a tea with common rue

What is a common rue tea?

It is the infusion of the dried or tender common rue plant (Ruta graveolens).

Before taking this medicine, you should read the contraindications as common rue can be dangerous in some situations.

It is a emenagoge plant, so it is contraindicated in pregnancy because it can produce abortion.

How to prepare an infusion of common rue

Common rue tea is done pouring boiling water over 1 g of fresh plant or half a gram of dried plant.

What is common rue tea used for? 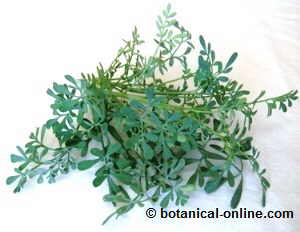 It is used as emenagogue to facilitate menstruation in women with amenorrhea.

It is also a digestive and antispasmodic plant, against the problems of slow or heavy digestions.

Formerly it was used as an abortifacient.

Commmon rue tea should not be taken in any case because of its toxic effects.

More information on common rue toxicity, side effects and contraindications.