Climbing plants or vines are those that use a series of resources to climb and rise on other plants or on some support that can hold them, such as a tree or bush, a fence, a wall, a rock, a pole, etc.

Climbing plants can curl or cling to other plants. This makes them dangerous for other plants in many cases. They can “choke” the plant they climb on by means of depriving it of light to the point of killing it. This is the case with many ivies that come to dry pines or other trees they use to climb.

Why do some plants climb on other plants? 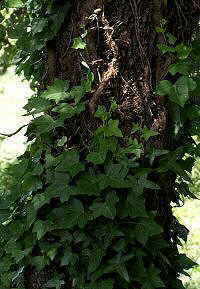 Photo of ivy climbing on an oak tree trunk

Climbing plants are the result of adaptations produced over many years.

In this way, they manage to leave the ground and rise in the direction of sunlight to achieve a more efficient photosynthesis.

Many plants, such as trees or shrubs, can raise their plant mass by developing hardened trunks that support the weight of the rest of the plant above the ground.

Another way to achieve the same without developing trunks is to raise their plant mass by screwing on some grip to climb, as vines, climbers or climbing plants do.

Through this resource climbing plants get separated from the soil where it is easier for them to suffer aggressions, such as pests, herbivorous bites, insect attacks, etc.

It should also be noted that a plant with flimsy stems crawling on the ground is more prone to rot as a result of moisture. 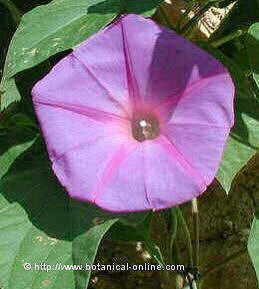 Many vines have the resources to reproduce very effectively, which in some cases makes them become true invasive weeds, much feared by farmers or gardeners who are forced to prevent or limit their expansion. Among this type of herbs we have for example the blue morning glory (Ipomoea acuminata).

It is a perennial plant cultivated as a garden plant and naturalized in many places. It can become a true invasive herb in incultivated fields and gardens in many warm places. In Australia its cultivation has been banned to prevent its expansion.

How do climbing plants get their goal?

According to the way in which the climbing plants manage to climb, they are classified in the following types:

They are those that are rolled around the supports, getting up with the help of their relatively narrow and flexible stems, preferably herbaceous in nature, although some of them develop woody stems, such as wisteria. 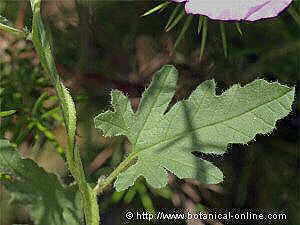 They are those that develop small roots with which they get hold of some support, even in places with less grip like the walls.

The genus Campsis consists of two species that also develop aerial roots. One of them, called Chinese trumpet (Campsis grandiflora = Bignonia grandiflora), is able to hold itself on any support. The other, called cow itch vine or hummingbird vine) (Campsis radicans = Bignonia radicans), needs to be held in other ways because its roots are not strong enough to hold the plant. 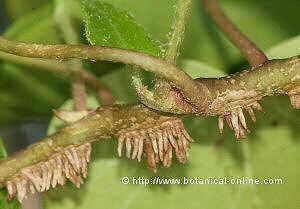 They are those that manage to climb by means of tendrils. Tendrils are stems, leaves or petioles of a leaf specially adapted to roll on some handhold and to be able to support the plant.

Within this group we have many plants belonging to the Fabaceae= Leguminoseae = Papilionaceae, in which this type of vegetal structure is habitual as it happens with edible plants like peas, or in other garden plants like sweet peas and vetchlings, Lathyrus (L. odoratus, L. aphaca, L. lathifolius, etc.), passion flowers (Passiflora spp.) or clematis (clematis spp). 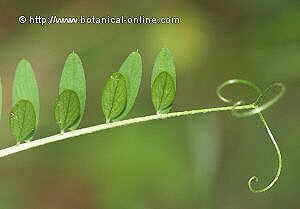 Foliar tendrils of a vetchling

Many climbing plants are lianas, also called vines, which are specifically climbing plants with branched stems. Most of these come from tropical areas, although there are some in the temperate zones.

Climbing plants according to their life cycle

We can group climbing plants into two types according to their duration in time:

More information on plants in the listing above.

How to plant a vine