Home › Medicinal plants › Medicinal properties of lychee
This article was endorsed by Elisenda Carballido - Dietitian nutritionist. Postgraduate in Phytotherapy and master in Nutrition and Metabolism.

Lychee (Litchi chinensis) is the fruit of a fruit tree from the Sapindaceae family originating in Southeast China.

In its place of origin, lychee fruit is considered an emblematic, exquisite fruit and, in general, is highly valued.

Traditional Chinese Medicine considers it a fruit that heats and provides benefits especially to the meridians of the lung and of the stomach.

In Indian medicine, lychee also plays an important role as a curative plant.

Lychee seeds are dried and ground, and are used to treat intestinal problems due to their astringency.

Lychee is a good source of vitamin C, almost twice that of citrus; With a content between 70 and 100mg. Per 100g. Of edible portion. 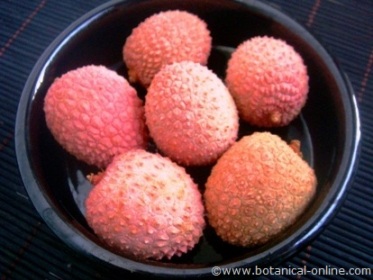 Photo of lychees, presented in the way they are usually served

Vitamin C helps to improve the appearance of the skin

It acts by stimulating wound healing and rejuvenation of tissues, favoring the manufacture of collagen (a protein that gives flexibility and firmness to the skin). Because of its richness in vitamin C, lychee should be present in all anti-aging diets.

In general, lychee is recommended in any balanced diet, and especially in those with increased vitamin C requirements, such as in sports, during pregnancy, in old age, for cholesterol and for people with heart problems.

Due to its content in vitamin C, epicatechin and antibiotic substances, lychee stimulates the body’s defenses and prevents infections. Lychee is suitable for treating cold and flu.

In addition, this fruit is also suitable for treating persistent cough, and is used for such purposes in Traditional Chinese Medicine as it benefits the lungs.

Lychee is a suitable fruit for the diabetic diet, both for its nutritional and medicinal properties.

A component present in the lychee pulp, called aldose reductase, has shown a protective role against complications associated with diabetic disease, such as protection of eye health and prevention of cataracts.

Lichi may be beneficial for people with heartburn or dyspepsia due to its content in anti-inflammatory catechins.

A serving of lychees before the meal may help to fight stomach discomfort.

Lychee is a beneficial fruit for the liver, as demonstrated by a double-blind study, which determined the protective power of lychee in animals with damaged liver.

The results showed that lychee-fed animals had lower levels of transaminases and less damage to liver tissue.

The results are attributed to the polyphenol richness of the lychee pulp, and this fruit is being studied as a potent antioxidant agent, with a protective role for the liver and certain types of cancer.