What is glutamic acid?

Glutamic acid is a nonessential amino acid, also called glutamate (its ionized form), used by the body for energy transport and protein synthesis.

Its abbreviated name is Glu. Chemically it is a dicarboxylic amino acid, because in its radical chain it contains a carboxyl group, the same than with another amino acid, aspartic acid.

There is peptide called L-Glutathione, which is composed of glutamic acid, cysteine ​​and glycine, that has antioxidant and detoxifying effect, intervenes on transportation action, facilitating the task by the membranes of our body.

The sodium salt of glutamic acid, known as MSG (Monosodium glutamate), is used as a flavor enhancer

Glutamic acid is an amino acid which takes part in metabolism and uptake of fatty acids, glucose for the brain and minerals like potassium.

Similarly, it is involved in the proper brain function, helping neurotransmitters, in combination with vitamin B6, make nervous system connections correctly.

Glutamic acid is necessary when there are pathologies that affect these areas, such as low mood, schizophrenia, dementia, fatigue, difficulty concentrating, sadness, poor memory, and other disabling diseases that affect the central nervous system by minimizing accumulated levels of nitrogenous substances and helps transport them, thus improving its operation and expulsion.

Also involved in the production of hydrochloric acid in the stomach to facilitate digestion and heal digestive ulcers.

It also deals with balance and transport of amino acids from the digestive tract to the rest of the body.

The body, with the union of cysteine ​​and glutamic acid, can form a potent antioxidant, called glutathione, which helps reduce damage caused by free radicals and increases the life of the antioxidants vitamin E and vitamin C.

It also contributes to the maintenance of the immunity of our body for its energetic effect on these cells. Also it has beneficial effects for the prostate. 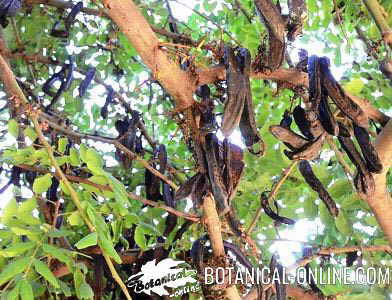 Photo of carob beans. The fruits of the carob tree (Ceratonia siliqua), which are used as substitute of chocolate, are one of the richest vegetables in glutamic acid.

It is not recommended a high consumption of glutamic acid in people with problems both, at kidneys and liver, because these are two organs which respectively remove excess of nitrogenous substances and process amino acid metabolism.

Glutamic acid excess would cause extra work. Since it is not necessary and, in addition, if there is any dysfunction, too much work may become harmful to health as a result of overloading them.

Consumption of glutamate is contraindicated in patients intolerant or with a special sensitivity to glutamic acid or in cases of histamine intolerant. They can not consume a high content of this amino acid when used as a flavor enhancer, that is, as Monosodium glutamate.

Monosodium glutamate E621 can be found in numbered food additives between the E-620 to E-625, widely used in food for its flavor enhancer effect. It is found both in a variety of pre-cooked meals or those that have been processed, as condiments, and even in soy sauce and its derivatives, widely consumed in Asian cuisine.

Animal foods are those that contain more glutamic acid, for example, meat

Within plant foods, we include, for example, asparagus or lentils

Although you can take supplements of glutamic acid, it is recommended to meet the needs of this amino acid through a balanced diet. If supplementation is necessary, consult with the specialist before taking it.