Home › Recipes › Characteristics of black mustard
This article was endorsed by Elisenda Carballido - Dietitian nutritionist. Postgraduate in Phytotherapy and master in Nutrition and Metabolism.

Etymology: The term ‘mustard’ derives from the Latin “Mustum ardens”, which literally means “burning grape must”. This derives from an ancient preparation made with grape juice and mustard, that had a burning taste.

Common mustard is a plant native to Eurasia, from Southeast Asia. It grows throughout Europe, except the northern and eastern regions; in Siberia, Asia Minor and North Africa. Naturalized in North and South America.

It is widely cultivated in England, Holland, Italy and Germany. The interest lies in its seeds, which are an aromatic spice widely used worldwide. 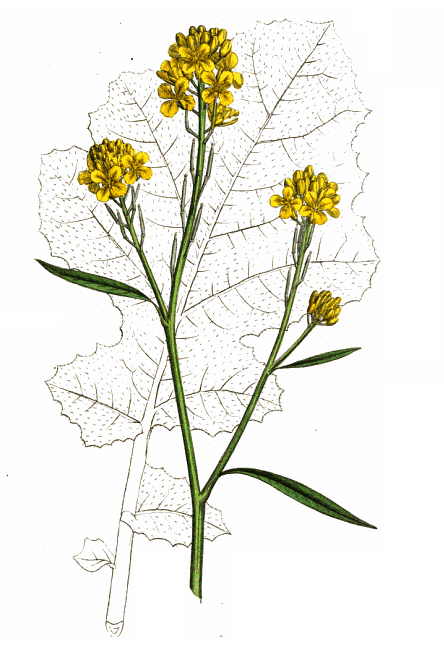 Black mustard (Brassica nigra) is an annual plant of the Brassicaceae family, a relative of the cabbage and arugula. Its size varies between 50 and 100 centimeters tall. Stem erect, smooth, branched with rough hairs towards the base.

Alternate, petioles and large leaves at its base. Divided by serrated margin segments. The lower leaves are divided into segments and the terminal deep lobe is superior to others. The upper leaves are less divided or whole, also with shorter petiole. The leaves of the black mustard are not sessile, which makes it different from Indian mustard (Brassica juncea).

The inflorescence is a flower cluster Mustard flowers are stalked, yellow, formed by four crossed petals (characteristic form of Brassicaceae or cruciferous plants). The calyx consists of four equally crossed sepals. It contains six stamens, of which 4 are longer. These flowers give off a pleasant scent.

The fruit of mustard plant is a nut in structure or dried leguminous silicua. It is long, slender and erect, thinner at the end forming a peak of 4-5 mm and attached to the stem. Inside, it contains between 8 and 12 reddish brown seeds with a size between 1 to 1.2 millimeters in diameter. 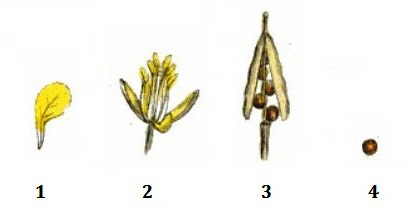 What parts of mustard are used

What does black mustard contain?

One of the most important components of black mustard is sinogroside, a glucosinolate that gives it its peculiar taste and most of its properties. (More information: Black mustard composition)

What is mustard condiment? 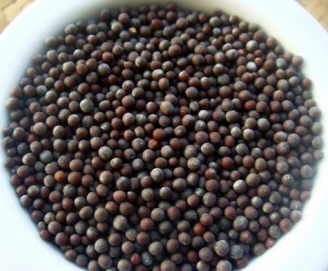 The word ‘mustard condiment’ popularly refers to a spicy sauce made with mustard seeds used as seasoning in food.

There are more than 40 types of mustard, although the most common different species of mustards are black mustard (Brassica nigra), white mustard (Sinapis alba) and mustard greens(Brassica juncea). With these species mustard sauces are normally prepared with.

All these species belong to the family of cruciferous plants, and are related with well-known vegetables like collard greens, arugula or broccoli. In fact, if you know the mustard sauce and you taste some of these vegetables, you may find the characteristic spicy flavor that reveals the kinship between these plants. 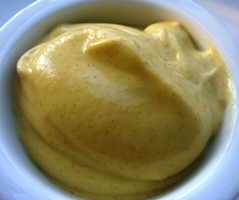 Photo of Dijon mustard sauce made from black mustard seeds, vinegar and salt.

Overall, mustard sauce can be yellow or dark red, depending on what kind of mustard it is prepared with and what ingredients you add.

Mustard sauce has a very pungent aroma and a spicy, burning taste. These characteristics are due to a substance containing the seeds, called sinigrin.

What are the benefits of mustard?

The main properties of mustard are due to its content of glucosinolates, some antioxidant components.

In general, all types of mustard contain some potassium, magnesium and phosphorus.

– Mustard should be consumed in small quantities, because it contains some very irritating principles. These components are contributing the peculiar aroma and burning taste of this condiment.

– The irritant effect of these seeds is useful in herbal medicine. Mustard seeds are used for their rubefacientes properties (external use) to stimulate blood circulation in certain areas and relieve rheumatic pains.

Other uses of Mustard