Kashas are a traditional food from Russia and Caucasus regions. This grain is common in the diet of these countries to the point of being part, as in the case of this recipe, of the breakfast of these peoples.

There are many variations of recipes of buckwheat porridge. It can be prepared with whole grains and very boiled, or with buckwheat flour. In some regions, it is prepared with milk, while others boil and mix it with butter or yogurt (common in Caucasian regions), or simply add sugar at the end of the preparation.

It’s a recipe the Western or the inhabitants of warm and Mediterranean areas are not used to, but in Eastern and Northern Europe, it is a delicacy for breakfast or snack. Similar to the known rice pudding, the texture is thick, with very warm flavor and aroma thanks to the touch of cinnamon and cooked cereal.

This recipe is an excellent breakfast and it is gluten free! 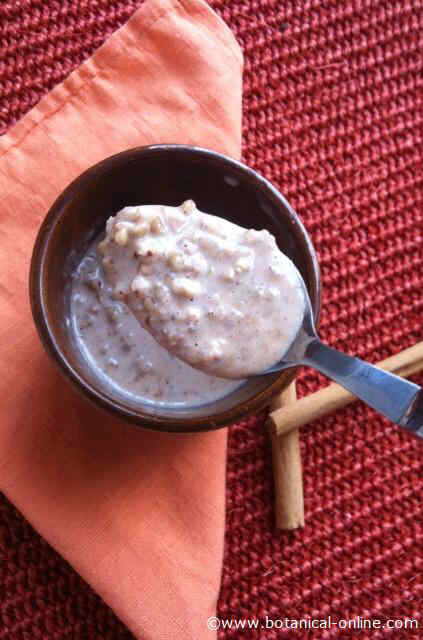 * In traditional porridge dishes, grain is ground to advance from grains into large pieces. It can be prepared with whole grains, but will be less thick.

– A stick of cinnamon

– Wash 3 times buckwheat grain in water to dislodge any dust that may contain. Smash it to break some grains.

– Toast the buckwheat grains with the butter and sugar. Stir thoroughly to coat all the grains well.

– Add the milk and lemon zest, orange, spices and cook over medium heat. This grain has a very mild flavor, and only with this recipe smell and gives sweetness and heat. Ideal for winter.

– Remove the cinnamon stick and serve in individual bowls.

Despite the thick texture and dull color, it is a traditional DELICIOUS recipe, sweet and warm, perfect for cold winter cure. The long cooking makes it an easy to digest food, so it is a recipe suitable for convalescent children, youth and adults, listless or tired.

As breakfast or snack, it is a recipe with all essential amino acids, vitamin B12 and zinc, nutrients often deficient in unbalanced vegetarian diets.

In short, a delicious recipe that gives us sweetness and satiety. The fiber content and grain starches prevent us to be hungry between meals, so we do not have to crave for food.

It is also a suitable recipe for coeliacs.

Olive oil in the Mediterranean diet