Home › Food › Properties of coconut oil
This article was endorsed by Elisenda Carballido - Dietitian nutritionist. Postgraduate in Phytotherapy and master in Nutrition and Metabolism.

What is coconut oil?

Coconut oil is produced by solvent extraction and in a similar way to other seed oils.

Coconut oil is extracted from coconut (Cocos nucifera), the inside of the seed of the plant or coconut, and specifically, from the edible white mass (endosperm), which is surrounded by a hardened layer (endocarp).

Coconut oil is more saturated than palm oil since it contains about 90% of saturated fatty acids, whereas palm oil contains up to 50% thereof.

Coconut oil, being the oil having a highest content of saturated fatty acids within the vegetal foods, is the least recommended nutritionally speaking for proper control of cardiovascular health, cholesterol and triglycerides. However, because of its plant origin, it does not rise cholesterol as much as animal fats.

Its saturated fat composition almost reaches 90 % of its composition. It is formed of medium-chain fatty acids such as lauric (almost 45%), palmitic, stearic and myristic acid.

It also contains small amounts of oleic acid (below 6%), and it practically does not contain linoleic or linolenic acids, that is to say neither omega 3 nor omega 6. 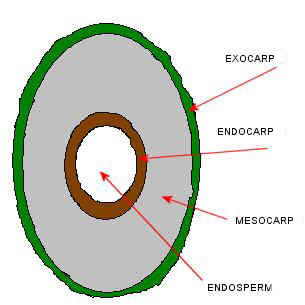 Sectional drawing of a coconut, which shows the different parts of this fruit.

Coconut oil has a slightly yellow color when it is in liquid form, that’s to say, at an ambient temperature of about 25 degrees Celsius.

However, if the temperature is lower, it becomes dense, with white appearance, semisolid or solid if temperature decreases more. Its acidity does not exceed 2 degrees values.

Due to this composition, unlike most vegetable oils, which are liquid at room temperature, this oil is thicker, semi-solid, but not quite as solid as animal fats.

What do you we use coconut oil for?

Among the main uses of coconut oil, there are the following:

It is mostly used in making sauces and margarines, but it is also used in baking, since because its solid characteristic make it ideal to cover some desserts.

Being similar to butter, it s an excellent skin moisturizer, not only for its content, but because, being very dense, nutritional effect is more durable and, therefore, more intense.

It is found both in the form of skin creams, face creams, sun lotions, hair preparations, shampoos and even lipsticks.