What is a coconut?

A coconut is the fruit (a drupe) of the coconut palm or also called coconut. This fruit is characterized by its big size, because its seed is the largest known after coco-de-mer (Lodoicea maldivica).

The coconut is a nut which has a green color very fibrous mesocarp (similar to that one having nuts or almonds) and which is not consumed. The edible part of this fruit is the seed pulp.

Mature coconut seed accumulates inside a pulp (endosperm) that is very aromatic, oily, white and solid, which is consumed and it is called “coconut”.

Coconut as an edible food 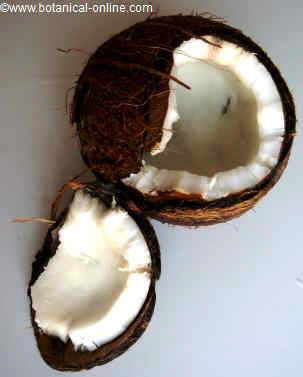 In the picture: mature coconut seed, open. The white edible pulp of the seed (endosperm)can be observed.

Coconut is a seed filled with minerals and trace elements important for the proper functioning of organism.

Coconut consumption is interesting in remineralizing diets as diets for athletes, since the minerals in coconut are essential to replenish electrolytes lost by sweating. It is also a nut that brings energy because it contains a lot of protein and fats.

It is also appropriate to introduce it in any fruit balanced diet because it provides antioxidant minerals.

Food products obtained from the coconut:

Because of its fast and slow sugars, it is a fruit suitable for athletes and people with diabetes, who must take into account the low glycemic index of coconut (45) tcompared to other fruits,

Edible composition of coconut per 100g.

Trivia: origin of the name “coconut”

The designation “coconut” was named by the Portuguese for the first time:

The Portuguese discovered the coconut in the Asian territory of Malabar (now South India), during the voyage of Vasco de Gama to India (1497-1498).

Then the word “Coco” referred to an imaginary character with which they used to scare children. Some popular songs still remember this character in the lyrics: “Go to sleep child coming Coco, and eats little children sleeping”.

The three germinative holes of coconut reminded them the figure of a monster, with two eyes and mouth (third hole). This was the reason why the fruit of the coconut was named “coco”.

Other books tell the origin of “coco” derives from the fruit similarity to a monkey, in Portuguese called macaque. As an anecdote, in some regions, some monkeys are trained to collect coconuts, and some monkey training schools still exist in southern Thailand.