Home › Food › Coconut milk properties
This article was endorsed by Elisenda Carballido - Dietitian nutritionist. Postgraduate in Phytotherapy and master in Nutrition and Metabolism.

What is coconut milk?

Coconut milk or Santan is the ground endosperm of the seed of coconut, the fruit of the coconut palm (Cocos nucifera L.)

Coconut is a nut, which has a very green and not consumed fibrous mesocarp (similar to a walnut or an almond). The edible part of this fruit is the seed pulp.

Mature coconut seed accumulates inside an oily and aromatic, white, solid pulp which can be consumed, called “coconut”.

When the pulp of fresh coconuts is ground, you get a thick, oily liquid called coconut milk, coconut juice or Santan.

This liquid or coconut water is often consumed fresh with the fresh coconut acting as container. It has recently become a packaged beverage sold in some countries under the trade name of “Zico coconut water.” 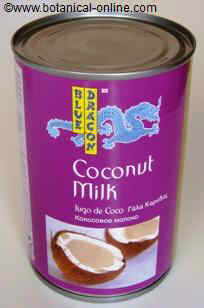 Photo of a coconut milk tin.

Saturated fat in excess can cause increased blood lipids (triglycerides), so we must moderate the consumption of coconut milk,as well as we should moderate cream consumption due to the high fat content.

Coconut milk in the diet

Other uses of coconut milk

Due to its content of phytohormones, coconut milk stimulates the growth of plants. Simply dilute the coconut milk and apply irrigation with water to your plants regularly.