Home › Medicinal plants › Characteristics of cyanogenic glycosides
This article was endorsed by Elisenda Carballido - Dietitian nutritionist. Postgraduate in Phytotherapy and master in Nutrition and Metabolism.

What are cyanogenic glycosides?

They are some type of glycosides that, ingested or chewed, produce hydrolyzed cyanide acid (HCN), that is what is commonly known as hydrogen cyanide, one of the most potent poisons.

Hydrogen cyanide is extremely poisonous because it prevents cellular respiration. (Prevents oxygen from being absorbed by blood cells).

If ingested in small quantities, sulfur is transformed by the action of the enzyme rhodanese. Taken in moderate amounts, it produces vomiting, difficulty breathing, limb weakness, blurred vision.

When ingested in larger amounts, it brings about seizures, loss of consciousness and cardiac arrest.

How can you know you have been poisoned with cyanogenic glycosides?

One way to diagnose its presence in the body is checking the breathing because it has a significant smell of almonds.

We can also deduct someone has ingested it when her/his lips and mucous membranes of the body become bluish.

Where cyanogenic glycosides can be found?

Cyanogenic glycosides are not unique to plants and can be found in other living beings or can be produced by cigarette smoke or cars combustion.

Why do plants produce cyanogenic glycosides?

In the case of plants, they are used as a defensive system to prevent the attack from herbivores.

Among the major cyanogenic glycosides we have: 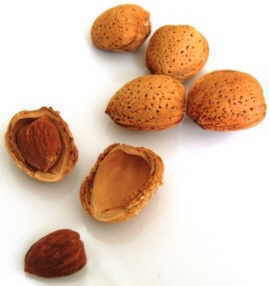 Bitter almonds are rich in a cyanogenic glycoside, called amygdalin

More information about natural medicine in the listing above.