Home › Medicinal plants › Almond properties
This article was endorsed by Elisenda Carballido - Dietitian nutritionist. Postgraduate in Phytotherapy and master in Nutrition and Metabolism.

Habitat: Originally from Asia, it is cultivated in warm Mediterranean places. Sometimes naturalized.

Leaves sharp, ovate-lanceolate, toothed at the edge till 12 cm long.

Fruit in drupe, with the mesocarp initially soft, but becoming stiff as it becomes ripe.

Proteins, minerals, vitamins (A and B mainly and sugar in the two variants). Fatty oil and albumin in the var. dulcis; amygdaline and fatty oil in the var. amara.

Amygdaline which by means of enzyme emulsin, in contact with liquids as saliva, is converted into hydrocyanic acid, a strong poison. (For more information about characteristic of var. amara see Botanical’s Alkaloid containing plants and other poisons) 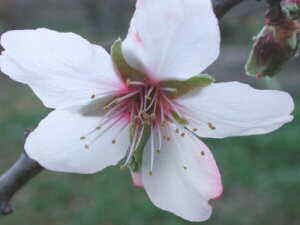 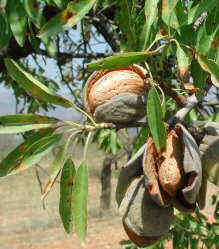 Picking up and storing: Almonds must be collected when well riped in the middle of September. Skin covering the outer shell must be removed. They must be spread on a dry surface to dry. It is very suitable to break the outer shell shortly before using them.

We will refer to the properties of sweet almond. In reference to bitter almond, although it has been used in home medicine, it should be avoided this type of usage, because it is a very dangerous custom, leaving it in the hands of experts in Pharmacology.

Internal use remedies with almonds

– Inflammations of digestive and urinary tract: Sweet almonds must be used. After removing the exterior brown peel (otherwise almonds are very indigestive) we will prepare milk of almonds (Dilute in a litre of milk the mixture of 30 gr. of smashed almonds and 20 gr. of sugar, sieve it and take a couple of glasses a day)

– Antifebrific, antitussive and pectoral: In case of fever, pain in the breast or coughing (The same preparation seen above can be suitable) (Oil of almonds produced by pressing them without peel, in a proportion of 6 cc each dose)

– Laxative: The oil of almonds also has lightly laxative properties.

External use preparations with almonds

Almonds and specially oil of almonds takes part in the preparation of many beauty products, to hydrate skin, avoiding wrinkles to appear, also if dermatitis or skin burns. (See some masks for oily skin, mask to treat acne, mask for wrinkles)

– Earwax: Almond oil can be useful to soften plugs and to facilitate subsequent extraction (Put a couple of drops of almond oil inside the ear and cover the ear with a bit of cotton. Disinfect the ear with parsley or onion juice after the extraction.)

– Bags under the eyes: Almond oil helps to relax the skin and reduces dark circles caused by inflammation of the capillaries. (Wet the skin under the eyes with a little almond oil)

Almonds can be considered a very suitable food because their high content in proteins (about 20 %) and very little content in carbohydrates. Much suitable for vegetarian diet to avoid animal proteins. Taking off their peel should be recommended to made them digestive.

With almonds nougats and marzipan (types of Mediterranean sweet) are made, being a very nutritive nourishment to fight cold in Christmas. It must be said that, because their high content in sugars, they should be eaten with care by people having obesity, cholesterol, stomachache, acidity and so on.

In East Mediterranean coast, there is the custom of eating raw almonds. Something that should be avoided taking into account that at this state almonds, besides being indigestive, contain amygdaline, which disappears when they ripe.