What is the navelwort and what is it used for? 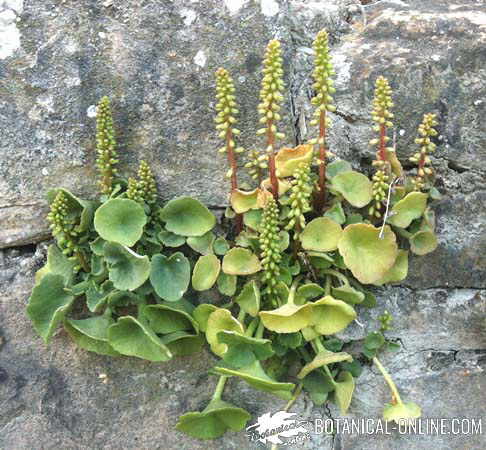 Navelwort is a plant that we can find growing between the cracks of the walls.

It is a small plant of annual cycle that stands out for the curious rounded shape of its leaves, juicy, covering a large number of walls , roofs, cracks of ancient ruins or separations of agricultural crops. It is a plant that offers a nice look and an original shape.

Etymology and denominations of navelwort

The scientific name of “Umbilicus” comes from Latin and refers to the navel shape of its leaf. The name of the species “rupestris” indicates that it is a plant that lives on the rocks or stuck to them.

As regards the different names of this plant, they are still curious. The most popular denominations are:

The plant always grows forming colonies in habitats with a certain humidity and prefers sunnier places.

We find it in the middle of the cracks and fissures of walls ,taking advantage of the little soil that exists between the stones, which, in turn, help it maintain the degree of humidity it needs.

Description of the plant Umbilicus rupestris 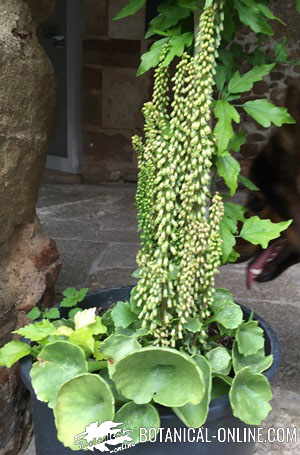 Navel wort with its floral spike

Plant of the Crasulaceae family, of small size, not exceeding 15-20 cm at the end of its flowering.

The plant is composed of a rosette, from which emerge the petioles that support the different rounded leaves of each bush, all of them intense green color, with a fleshy and juicy texture. These leaves have a slightly toothed shape and in the center of them a groove that reminds us of our navel.

Its growth process begins at the end of winter, when all the leaves emerge and grow, and at the end of spring grows in the middle of each plant a round reddish stem, from where dozens of tiny flowers hang, from the beginning to the end, forming an inflorescence with the appearance of a spike.

Navelwort blooms through this erect stem or spike that emerges from the center of its rosette and from which numerous tiny flowers hang, almost from the base to the end.

In summer the floral stem is dried, the leaves and the plant disappears until the end of winter. However, as a hemicryptophyte plant that is, its roots remain quiet and protected underground and under the rocks that house it.

Possible confusions of navelwort with other wild plants

There is another plant in nature very similar to the navel, but of the Araliaceae family: the water naval or marsh pennywort (Hydrocotyle vulgaris), which looks very similar to the navelwort, but which differs basically from this one because both plants do not share habitat, but they live in very different environments. Water naval, such as its common noun suggests, is always found in the water , in still waters, shores of lakes, ponds or in the backwaters of calm rivers. This plant has its roots submerged within the water and the leaves and stems outside.

Water naval is a creeping plant, with ramifications, from which the alternate leaves , having the rounded shape and very similar to those of navelwort , somewhat more ribbed and serrated on the edge, but without the central slit that characterizes navelwort. On the other hand, we will never find navelwort at the edge of the water, but rather seems to run away from it and climbs walls, walls and rocky areas.

Navelwort has vulnerary and healing properties. In traditional medicine it has been used from always fresh, for immediate cures. One of its most common uses is to remove the skin from the top of the leaf and crush it against the wound to heal it. They were the “strips” of our ancestors!

A similar cure can also be made by a poultice on top of the wound, made with the crushed leaf.

Navelwort is a plant apt to be consumed in the kitchen. It is eaten raw, leaves and petioles in salad, being very crunchy and tasty. It only requires cleaning, no need to peel it.

Since their leaves are consistent, fresh and smooth, they are ideal for making artistic dishes and making them a culinary adornment.

How to collect wild plants