Arginine is a nonessential amino acid to humans because it is synthesized from L-glutamine. Its greatest concentration resides in the skin.

Its abbreviated name is Arg.

Arginine is contraindicated in people with blood sugar level control, such as diabetes, who are also taking either drugs or natural substances that increase the risk, as this amino acid can also increase these levels, unbalancing its ideal state.

It is not recommended high intake of this amino acid in people who often suffer from herpes (herpes simplex, labial herpes or herpes zoster) since this amino acid stimulates the virus that causes such symptoms increasing the chances to appear more frequently than usual. The amino acid having the opposite effect with respect to arginine herpes is lysine. 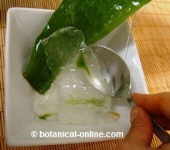 Aloe gel, rich in arginine, is used for skin care.

– Arginine is an amino acid that preserves the immunity of our body by stimulating the thymus in the production of lymphocytes, which act as the body’s defenses against pathogens.

– Arginine also facilitates the removal of certain toxic substances promoting liver functions and maintains the balance between CO2 and nitrogen. Requirements are necessary in case of fatty liver, hepatitis, cirrhosis or liver failure.

– In addition, it has various actions such as improving blood circulation, preventing arteriosclerosis, and help combat symptoms of impotence and infertility when they are caused by poor circulation. It is necessary in cases thrombosis, hemorrhoids, etc. as a vasodilator and to thin the blood.

– It is involved in the production of hormones such as growth, thus preventing dwarfism and malformations.

– It helps tissue healing through the production of collagen connective tissue. In this sense it is useful for wounds, cuts, scars and other skin abnormalities.

– Arginine minimizes the production of fatty tissue, reducing cholesterol absorption and can be used as prevention against coronary diseases.

One of the main functions of this amino acid, together with citrulline and ornithine, is to allow the production of urea for its important role in what is called the urea cycle (metabolic pathway that allows the removal of NH4 + excess of amino acid catabolism so as to be eliminated as urea).

Animal foods are those that contain more arginine, for example, veal liver

Within plant foods, we include, for example, buckwheat or watercress

Although you can take supplements of arginine, it is recommended to meet the needs of this amino acid through a balanced diet. If supplementation is necessary, consult with the specialist before taking it.