What is cashew tree (Anacardium occidentale)

The tree producing cashews (called cashew tree), is a medium size tree, (about 6-10 meters). These trees usually take about 36 months to bear fruit. They usually have a fruitful life of about 3 decades.

Related to pistachios and mangos. 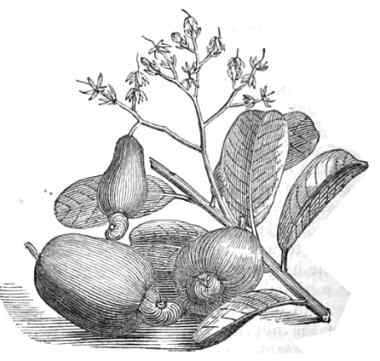 Drawing of cashews with leaves and fruits

Cashews produce very dense and thick branches so they are very dense trees. Moreover, they keep the leaves, although they change them gradually, that’s to say, they are evergreen trees.

Cashew leaves can exceed 20cm long, 10 cm wide. They present oval shaped simple leaves, smooth to the touch and with a rounded termination. They have an intense green color.

Flowers of cashew tree should not be confused with the bell-shaped fruits that show bright and appealing colors. Flowers are much more discrete, light yellow or green and about 15cm long.

Cashews have male and female flowers. They contain several sepals and petals, not exceeding half a dozen in number. They do not exceed 10cm in size and may have slightly red hues. 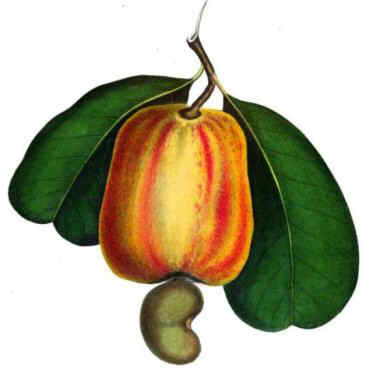 Drawing of leaves and fruit of cashew tree. Note the detail of the seed at the bottom

The fruit of the cashew tree has a similar resemblance between an apple and a pepper. They are hanging as a bell and are edible. The fruit can be eaten fresh, although it is often used in the preparation of jams and sweet desserts or even juices. They are of an orange color that turns into very intense and attractive pink-red.

At the outer end of this fruit, a dark gray, kidney-shaped projecting part appears, such as the stem of the pepper, but in reverse position. This is a fruit in drupe, which contains the edible seed of the cashew tree, called cashew.

To be fit for consumption, the gray shell that protects them and the inner resin should be removed. The resin is called urushiol. In contact with the skin, it produces skin irritation, but, if ingested, it can be toxic and even cause fatal poisoning (at high doses). Once roasted and removed both sides (shell and resin), cashew nuts can be eaten as a nut food without posing any health problem.

Cashew tree seeds are shaped like kidney beans or beans.

Inside the seed, they containing the edible, fleshy part. After having removed the peel and dermatotoxic phenolic resin, they are suitable for human consumption.

Depending on the climate they need to grow, the color and the way they are, there are two different kinds of cashews:

History and origin of cashew tree

This tree is native of Brazil, especially the Amazon. After the colonization by the Portuguese, it was first transported to other parts of the world. Currently, in addition to Brazil, they also can be found throughout Central and South America, parts of Africa, India and Vietnam.

It requires tropical climates with consistently high temperatures (above 20 ° C) so they it does not tolerate the cold well. It also requires heavy rains, if no such rains and the weather is too dry, its cultivation requires additional water.

Its cultivation is usually done by planting the seeds. But this is not the only system of multiplication of these trees, and thanks to the wind pollination, they are fertilized to produce new trees without the need to be planted exclusively.

Cashew tree is not difficult to grow, because it tolerates a wide variety of soils, even rough or very sandy or rocky soils, but, if grown in most grateful areas, it is easier for it to grow and produce more fruits.