Characteristics, history and production of mangos

A mango (Mangifera indica) is an evergreen tree that can reach 20 meters in height, but usually is half this size, especially when cultivated outside its place of origin.

It belongs to the Anacardiaceae family, which is known because other fruit trees such as cashews (Anacardium occidentale) or pistachios (Pistacia vera) and industrial medicinal plants less known as mastic (Pistacia lentiscus) or garden trees as the false pepper or Peruvian pepper (Schinus molle).

Mango flowers are very small, yellowish or reddish gathered in very large panicles of 400 to 4000 flowers. The flowers attract a lot of insects, especially flies and produce a characteristic odor. They may result allergic to some people. 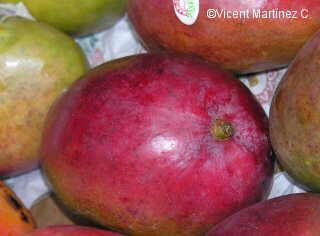 Mangoes or mangos are the fruits of mango tree. they are oval drupes of varying size, some little bigger than an almond, others come to reach two pounds.

Its skin is light green at first and gradually becomes reddish brown as it matures.

The skin should not be eaten because it contains a liquid that is irritating.

Inside the fruit appears a single bone.

Mango meat is juicy, sweet, fibrous, with a deep aroma and great taste. 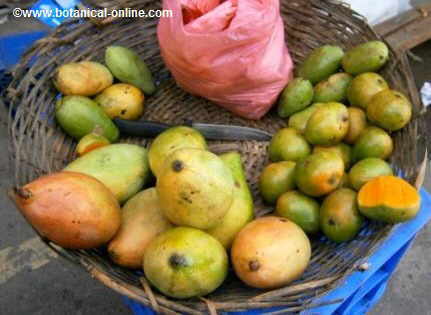 Photograph of different types of mango in a Southeast Asian market

The production of mangoes in the world

Today, the world’s largest producer is India where the crop is more abundant, followed by Brazil, China, Thailand and Mexico.

The first country in Africa is Nigeria, ahead of Congo and Egypt.

In general, mangoes are not very demanding with the soil and can be adapted in any favorable climate.

How to cook mangos?