What are the differences between Sambucus nigra and Sambucus ebulus ?

How to differentiate an elder from a dwarf elder taking into account their  leaves, fruits and general bearing

If it is this plant, you better not touch it because it is very poisonous and the fruits can be deadly, especially in children.

Although it has been used as a medicinal plant with the same properties as elderberry, given the extreme toxicity of its fruits, it should not be used in home medicine.

How to differentiate elder from dwarf elder focusing on their  leaves

If you are used to seeing elder, you will see that the dwarf elder has completely different leaves: narrower and elongated than those of elder. See below a comparative photo of both plants:

More photos on elder leaves  and dwarf elder  to see the difference in the shape of the leaves:

Differences between elder and dwarf elder considering their flowers

It is very easy to distinguish these two plants comparing their flowers:

Differences between elder  and dwarf elder based on  their fruits

Elder berries are characteristically  pendulous, that is, they hang from the branches when they ripen. Instead, dwarf elder produces fruits that remain high, not hanging from the branches. Again, the leaves and the tree bearing will help us finish distinguishing the elderberry. 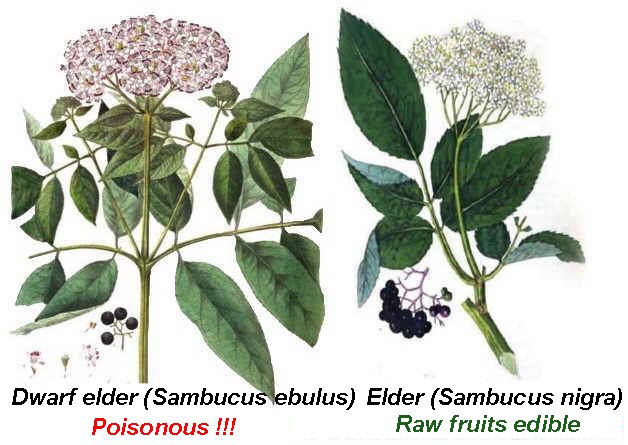