The genus Vitis comprises approximately 65 species of shrubs or deciduous, crawling or climbing vines, of the Vitaceae family . Most of them are derived from the wild species Vitis vinifera L.

Species of grapevines can be found in the wild in many temperate regions of the northern hemisphere.

The stems are woody and short and from them are born the very knotty branches, called vine shoots. As they grow they lengthen and lignify, acquiring a brownish tone with a crust that melts into strips. Some species can reach 30 m. of length.

They have alternate leaves, serrated, palmatinerves, most of them of heart-shaped, and divided into 3- 7 lobes. In autumn, before falling, they acquire a typically red or yellowish coloration, due to their content in anthocyanins.

Opposite the leaves, we have forked tendrils, which allow grapevines to climb, although many plants usually crawl on the ground when they do not find the adequate support.

Grapevine flowers are gathered in clusters or panicles. They are born in spring and contain 5 petals. They are very little showy and have a yellowish-green color.

They become fruits of 1 to 2 cm of diameter of bluish black color. Its fruit is a berry, called grape. Many grapes are gathered together in a bunch of grapes. Inside a grape, we can find the seeds in number from 0 to 4; they are are known as grape seeds or grape pips.

WHAT ARE GRAPEVINES USED FOR? 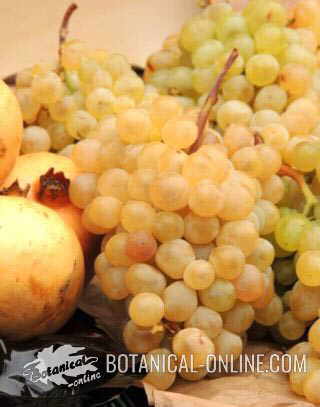 Photo of grapes, a fruit of autumn

Most grapevines are edible wild plants whose leaves can be picked when they are tender and eaten. They are used to wrap meats, rice, mushrooms, etc.

Even from their tender shoots water can be extracted to drink in case of need, but, attention !: They should not be confused with other toxic plants, like Menispermum canadense L. (“Canadian moonseed” or “common moonseed”), a North American shrub whose fruits remember the grapes and which are very toxic, having produced many cases of deaths in children who confuse them with grapes.

Some species of grapevines (Vitaceae) produce fruits, grapes, which are edible. The fruits of others are too rough and should be eaten for the preparation of jams, cakes or drinks.

Do not confuse the grape with another species that could lead to confusion, the sarsaparilla (Smilax aspera), a plant very common in America and Europe, which is used as a medicinal plant, although its fruits, rich in saponins, are toxic.

The wine is used to prepare preparations with medicinal plants. With different recipes wines with tonic-stomach, depurative or hepatotonic properties are obtained. All of them are recipes in which the wine has been macerated with a medicinal plant, which has given its tonic properties to the stomach (hydroalcoholic extract).

History of the use of grapes as food

Since ancient times, man has used grapevines to collect their fruits. It is famous the story of Noah who planted a vineyard and got the wine from the grapes, or how grapevines hung from the gardens of Babylon.

The truth is that, since ancient times, humanity has always taken advantage of common grapevine. Initially he did it with the wild species and, later, with the domestication of the plant, he took advantage of the cultivation of grapevine to obtain grapes to eat fresh or dried (raisins) or to make wine.

When were raisins invented?

It is believed that the first raisins were produced in Asia Minor by the method of burying the grapes in the sand. The function of drying the grapes to turn them into raisins was to preserve them longer and, through the concentration of sugar, to provide more energy for workers in hard trades or in times of little food.

In this way, grapevine became the main source of sugar during a very long period of the past. For this purpose not only raisins were used, but also grape marmalades and some preparations such as “arrop”, a Spanish preparation wich consists on boiled must mixed with fruits in order to make a sort of sweet dessert.

The first men gathered wild grapes, as shown by the remains of seeds found in some sites in the Middle East.

The first vestiges of the use of this plant for the production of wine date from the year 5,000 BC. They were found in archaeological sites in Hajji Firuz Tepe, in the Agros Mountains of Iran. It is a clay pot in which the remains of wine were preserved in the form of a layer of red paint.

Grapevine in the ancient towns

It is believed that the Egyptians of Ancient Egypt had wine supplied to them by Palestinian merchants.

Later, during the dynastic periods, they themselves had to know the cultivation of  grapevine, since in some hieroglyphics the orientations of how a it should be planted around a pole so that it can climb can be appreciated.

For this town, wine was only a luxury available to the more affluent people since lower workers and classes drank beer.

In Mesopotamia, the first Sumerians drank beer, but there are indications that the first grapevines were cultivated around 3,500 BC. The first clear references date from the year 2,500 BC and appear in the form of stone seals where scenes of banquets are recorded with people who drink wine.

Regardless of these findings, it seems clearer that common grapevine began to be cultivated around the year 3,500 BC. in southwestern Asia, probably in the southern Caucasus region (what would currently be constituted by the nations of Georgia and Armenia). From this area, it quickly spread to the entire Mediterranean region.

In 2,500 BC it appears in China and India. In 2000 BC. arrives in Greece. About 1000 BC appears in Italy. In 900 BC it began to be cultivated in North Africa and arrived in Spain, through Catalonia, around 500 BC. Between the end of the 15th century and the 16th century. It extends through America, reaching the end of the eighteenth to Australia and New Zealand.

The origin of the popularity of wine

The truth is that most of ancient people cultivated grapevines both to eat the grapes and to produce wines. However, the extension of this crop is mainly due to the importance that the wine had for the Greeks and Romans and especially the Phoenician merchants, located in what would modernly be the countries of Syria, Lebanon and Israel. Tthey dedicated to trade and to extend their culture in all the towns with which they traded.

There are abundant references about wine in the Iliad and in the Odyssey, since the Greeks traded with this drink. Greek doctors, like Hippocrates, recommended it to patients.

Grapevine and wine in the Roman Empire

The Romans worshiped the wine and even had a divinity dedicated to it, called Bacchus. In the parties dedicated to wine, called bacchanals, they used to drink and get drunk profusely. The Roman ships transported this drink from the most remote places of their empire. Thus, for example, vinum gaditanum or wine from Cádiz, in the south of Spain was very popular.

In addition, the Romans constitute the main culture that impel the techniques of its cultivation. They were the ones who obtained different varieties, recognized the main diseases, learned the techniques of pruning, the importance of irrigation, the different types of soils and the way to fertilize them. They were also the first to use barrels and glass bottles to store it, in front of ceramic jugs or animal skins that had been used until now.

The first bottle of wine found is Roman. It dates from the year 325 BC and was found in the year 1867 in a German city called Speyer. It was found inside a sarcophagus and it is a small glass amphora in which the liquid is still found.

At the bottom of it appear large amounts of silt and the rest, about ⅔ of the bottle, you can see a pasty liquid, which would surely be formed by the mixture of wine and oil.

The Romans used oil to seal the wine and keep it, since, although they knew the cork, they hardly used it as it is done today. This first bottle of wine can now be seen in the Palatinate History Museum, near Speyer.

In the first century AD, the Romans began exporting wine cultivation from Italy to France, England, Spain, and Germany. From Europe it spread to North Africa and America, to be cultivated in most of the temperate regions of the world.

The production of grapes nowadays

At present most of the production of the grape, more than 70% goes to the manufacture of wine.

How many grapevine species are there?

There are about 60 species of grapevines. Among the most important we have the following:

More information on grapes and wine.

Written by Vicente Martínez Centelles Founder of the web and director. Teacher of natural sciences, expert in plants, natural remedies and botanical photography.