Home › Food › Why does your mouth itch when eating kiwi?
This article was endorsed by Elisenda Carballido - Dietitian nutritionist. Postgraduate in Phytotherapy and master in Nutrition and Metabolism.

Is it normal for the kiwi to produce itchy tongue?

Yes, it is normal for the kiwi to itch a little on the tongue.

Why does kiwi cause this itching sensation? 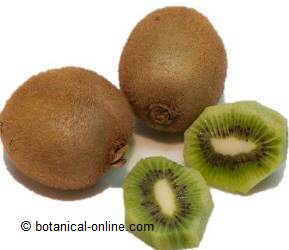 The spicy-like sensation that kiwi leaves in the mouth is due to a proteolytic enzyme (that digest proteins), called actidin.

It produces itching because it slightly degrades the proteins found in saliva and on the tongue, producing this sensation of itching.

In addition, its acid content, such as oxalic acid, can also contribute to this effect.

All the kiwis itch?

Not always, when you eat kiwi, it itches on the tongue. Sometimes a kiwi is ripe enough not to sting (contains less actidine).

Also, the cooked kiwi does not itch because the heat destroys all its actidin.

When is the kiwi itch dangerous?

In some cases, the itching in the throat or swelling of the tongue may indicate a type of allergic reaction called oral allergy syndrome (OAS), which can become a serious condition, depending on the case.

Some people tolerate ripe kiwifruit, but it feels bad when it is too immature. This is due to the fact that during ripening there are kiwi components that are transformed and do not produce allergy.

The symptoms of kiwi allergy are: