Habitat: By the side of the paths, waste lands and dry grasslands.

Perennial plant of the mallow family – malvaceae – up to 1,5 m. Hairy stems, ligneous at the base, spreading or erect.

Spring is the best season to collect the flowers before they are in their bloom. Leaves should be collected when the plant is in full bloom either in Spring or Summer. They should be kept in a dry air-tightened container.

Mallow to cure wounds, eczema and other skin disorders.

The healing properties of mallow are vast. Since this is a very common plant, it is available most of the time to use it as a natural remedy 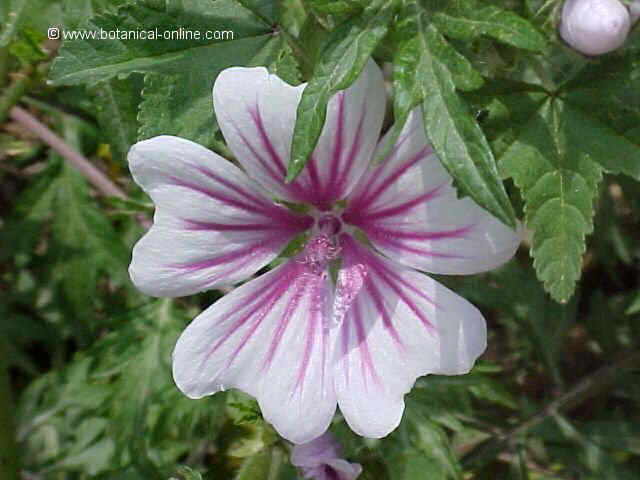 – Emollient: In front of pimples, blisters, furuncles, seborrheic dermatitis, eczema, injuries, ulcers or whatever skin affection, the mucilage of this plant will be suitable as a softener.

It can also be used for mouth sores or gingivitis (rinses with the decoction for 10 minutes a teaspoon of flowers per cup of water.) (Mixed infusion of mallow and thyme, make mouth rinses)

– Pyorrhea: (Mouthwashes with the decoction during 10 minutes of a teaspoon of flowers per cup of water.)

– Pain in the breast: (Infusion for 10 minutes of two spoons of dry leaves for each glass. To increase its emollient properties it can be taken with honey) (Infusion for 5 minutes of a tea spoon of flowers with two leaves of eucalyptus. Against coughing.)

– Mouth inflammations: (Mouthwashes with the decoction for 10 minutes of a tea spoon of dry flowers per glass of water)

– Varicose veins: (Infusion of a spoonful of flowers and leaves per cup. Two cups a day)

– Constipation: (Decoction for 20 minutes of 30 gr. of dry leaves and flowers per litre of water. Drink 3 glasses every day.)

Common mallow can be used as food. It is know since historical times, since it was used by The Greek and The Roman,who ate it with profusion, mixed with other vegetables.

Apart from the medicinal properties seen above, it is a plant very rich in vitamin A, Vitamin B, Vitamin C, and vitamin E.

Because of its emollient properties, it is very used in cosmetics. Many facial tonics can be made from it:

– Compresses for the face with the decoction of a handful of dry leaves per litre of water.

– A skin tonic with the broth coming from boiling some dry flowers in a litter of water.

Toxicity, contraindications and side effects of mallow

In appropriate doses, it is not mentioned any toxicity, side effects or contraindications in the use of this plant.