Home › Medicinal plants › Properties of milk thistle
This article was endorsed by Vicente Martínez Centelles - Founder of the web and director. Teacher of natural sciences, expert in plants, natural remedies and botanical photography.

Habitat: We find it at the side of the roads and paths, in the dry, barren lands, during April and July.

Very tall biennial herb, until 2 meters high with flowers gathered in big red solitary heads, which can be easily recognized because of its curved bracts,ending in a strong spine.

Spring is the best season to make use of this plan, specially because we use it fresh, just after collecting it. We can pick the fruits in Summer

Milk thistle is one of the best medicines for your liver

– To ease liver congestion we use not only the roots and stem but the leaves juice too by crushing them in the desired proportion. The compounds contained in this plant, especially silymarin, helps fight liver degeneration by means of helping the body eliminate toxins that could be responsible for the development of cirrhosis or hepatitis.

Moreover, this plant helps reduce liver inflammation, counteracts the effects of alcohol and it is able to regenerate damaged cells. (Take some milk thistle supplement. On sale in pharmacies of herbalists) (Eat milk thistle young leaves in salads)

– Its effectiveness as an antidote against Amanita venom has been tested in order to prevent these fungi toxins can destroy the liver. In the same way, dandelion can be used to treat chemical poisoning.

– Alcoholism: Milk thistle, by the presence in the seeds of a component called silymarin, is a remedy for the treatment of liver diseases, among which we might mention hepatitis, liver failure and cirrhosis produced by excess of alcohol.

You can choose of the following preparations:

– Roots, stems, and the juice of crushed leaves to the desired ratio.

– Infusion of a spoonful of mashed fruit per cup of water for 1 / 4 of an hour. Take three cups a day for 1 or 2 months

– There are silymarin supplements that can be taken according to the information leaflet.

Milk thistle for your gallbladder

In the same way, milk thistle preparation are very useful for gallbladder. For gallstones: It helps to ensure that stones are not formed in the gallbladder (1 ml of tincture 3 times daily)

The tender leaves of milk thistle, such as dandelion leaves, are highly recommended edible wild plants which are underused. They are very reach in iron that can be very helpful in the treatment of baldness because it prevents seborrhea , dandruff or dry hair.(Eat tender fresh leaves in salad)

Milk thistle constitutes one of the main galactagogue plants traditionally used. Its use increases breast milk. (Decoction of a teaspoon of seeds per cup of water for 10 minutes. Take a couple of cups a day.)

Attention: Although historically milk thistle has been used to improve the flow of breast milk, the fact is that currently there are not enough adequate and well controlled studies in humans, so it is not recommended for consumption during pregnancy or lactations.

To cure low blood pressure we can make a remedy by means of cooking its fruits in a proportion of 30 grams per litter.

Milk thistle for the AIDS virus

The protection provided by this plant to the liver can be effective to help combat the destructive effects that AIDS virus drugs have on liver.

Other properties of milk thistle

Among other properties of milk thistle we can point out the following:

– Haemostatic: Milk thistle helps to stop bleeding (such as in nose bleeding)

Thistle in the kitchen

Milk thistle can be considered an edible wild plant. Its tender leaves can be prepared in salads once their edge is cut to remove the thorns.

Its leaves, roots and flower heads can be eaten boiled. They are not only highly beneficial for the liver but they constitute a good antioxidant, with properties to prevent the formation of cancerous tumors. 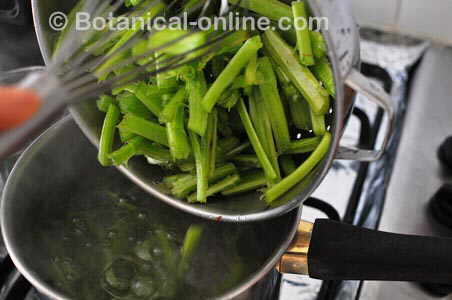 It is an edible wild plant whose young leaves can be added to salads and exert a restorative function of liver cells and help the body to eliminate toxins, which is particularly interesting when the diseased liver needs this help.