Home › Botany › Characteristics of chard
This article was endorsed by Julián Masats - Technical agricultural engineer specialized in horticulture and gardening.

What is chard (Beta vulgaris) ?

Chard (Beta vulgaris) is a plant of the Amaranthaceae family, native to southern Europe and, according to a more general opinion, Italy.

It comes from the wild species sea beet (Beta maritima Linn), which grows freely in many sea areas of southern Europe and northern Africa or watery areas and brackish inland. The leaves of this species, either raw or cooked, are also edible.

They are considered especially delicious at the beginning of the season, in the spring when the leaves are young and tender and eaten as if they were spinach. In fact, this plant is also commonly known as “wild spinach”. As the season progresses, the leaves become more bitter. From this moment, many people find them unpleasant.

Both varieties, however, have edible roots and leaves.

There are written records that suggest the consumption of these leaves in the ninth century BC in Mesopotamia. In fact, the chard has been widely used since antiquity for human and animal consumption, not only its leaves but also its roots. It seems that the Egyptians consumed it regularly and the Greeks, Romans and Arabs often cultivated them.

After years of vilification, when the chard was considered a “vegetable of the poor” and “food for the animals”, the consumption of spinach leaves has been increasing, constituting the main vegetables after spinach.

It was from the nineteenth century D. C. when the use of the root of this plant as general food was abandoned and it was intended primarily for the production of sugar or alcohol extraction, while the sugar variety of this species was exploited (Beta vulgaris var. altissima). Less specialized varieties were being earmarked for animal feed. 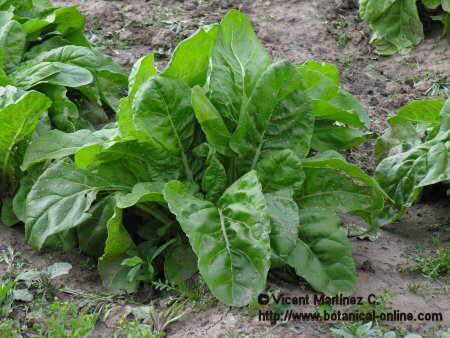 Detail of the chard leaves

Chard is grown mainly for its leaves, which are shiny and very thick with prominent veins. Their color varies greatly depending on the variety, and there are varieties that produce red leaves and others that are greener. The succulent leaves are called “pads” and are prized in cooking. They may present shades of red, yellow or white and they are very tender and tasty with a slightly bitter touch. The leaves are often eaten well boiled, while the leaves can be eaten lightly cooked, as if they were spinach.

Chard is a biennial plant. In the first year of life is when the leaves are collected, when they are young and tender and are located at the foot of the rosette-shaped plant. During this year, this plant tends to concentrate all its production in developing leaves, while the root is slightly thickened.

In the second cycle of life, the plant will stop investing energy in developing leaves. Left to grow, it can reach two meters in height to produce a floriferous stem with upper peg with tiny green flowers. The leaves are stiff and and they become bitter and are not suitable for eating; however, some people prefer the taste of the grown plant and collect their leaves and stalks for cooking chips. It is during this second year when the root is thickened with reserve substances.

Varieties or classes of chards

Among all, we could mention:

Production of chards in the world

Chard is a fairly widespread cultivated plant worldwide. Although it originated in Europe, from here it spread to other parts of Asia and America.

In Europe the main producers are Germany, France, Italy and Holland.

United States and Canada are the main producers in America.

The chard in the kitchen