Home › Food › Food rich in histamine
This article was endorsed by Elisenda Carballido - Dietitian nutritionist. Postgraduate in Phytotherapy and master in Nutrition and Metabolism.

Foods with more histamine that should be avoided in case of migraine, allergy and intolerance

What foods have histamine and why not eat them? 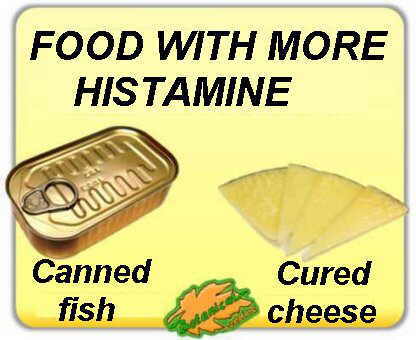 Food rich in histamine. Among all, the canned fish and the cured cheeses stand out, although there are other rich foods. All of them should be avoided in case of migraine.

Histamine is a substance produced by the body itself that can also be found in food.

There is no need for all people to decrease the consumption of foods containing histamine: it is only recommended to make this type of dietary restrictions to people who have histamine intolerance or symptoms, such as migraine, dermatological or gastrointestinal problems.

Who should not eat foods with a lot of histamine?

The intolerance to histamine is due to a deficit in the DAO enzyme, which can be genetic, or caused by the taking of drugs (there are up to 90 drugs that block this enzyme).

What are the foods with more histamine?

Not all foods have the same level of histamine and there are foods much more inadvisable than others, and therefore the rigidity of the recommendations (for example “special days”) may change slightly depending on the food we are talking about. Knowing which foods are the richest in histamine will help to better follow the nutritional guidelines:

The following table shows the histamine content of the food, expressed in mg per 100g:

Can you eat foods that have less histamine?

It should be taken into account that people with histamine intolerance can present symptoms even in low doses of histamine. Therefore, as a general rule, strict adherence to dietary guidelines is recommended, at least during intense episodes of migraine.

More information on histamine and migraine.