Common English name: Golden seal, goldenseal, orange rood, yellow puccoon, ground raspberry, Indian paint, Eyebalm (The name is due to the bright yellow color of the rhizome and to the fact that it has a series of marks that make it look like the old stamps that were used to seal the documents)

Habitat: Were to find golden seal?

Native to Canada and the eastern United States, it grows in humus-rich lands in the shade of forests or at the edge of forests.

It is increasingly scarce in its natural habitat, being sought with much eagerness for its therapeutic properties.

It is cultivated extensively in North America, mainly in the states of Washington and Oregon, and in Canada, in the region of Ontario. There are also crops in Europe.

Drawing of the plant

Perennial herb of the Ranunculaceae family up to 30 cm.

Golden seal leaves are born in pairs at the end of a foliar stem, very wrinkled, palmately-lobulated, with 5 lobes and with well highlighted hairs. Lower leaves much larger till 22 cm in length and petiolated; superior ones, sessile.

This plant produces a solitary flower of white-greenish color, without petals, although provided with numerous stamens with very prominent yellow anthers.

Fruits in red berry with a single seed.

Golden seal has been considered one of the main medicinal plants used in phytotherapy in North America. Many times it has been called “the ginseng of the poor” because of the wide variety of applications that both plants have had in curing numerous diseases and the fact that it was very easy to get.

It is known that Native Indians used it practically for everything and there is an extensive bibliography that refers to the therapeutic use of this herb in uses as diverse as antiseptic, antifebrile, astringent, aperitif, tonic, hemostatic, insect repellent, antimalarial, antithyphilitic, antigoneorreic, Antithyroid, etc. 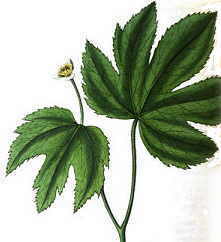 Drawing of the plant

Golden seal: an effective remedy for the treatment of wounds, varicose veins, cuts or ulcers

These properties, which were already frequently exploited by the ancient Cherokee, have again been modernly recognized and used in the treatment of the following conditions:

Remedies for internal use with gold seal

Preparations for external use with golden seal

The haemostatic properties of alkaloids, combined with the vulnerary properties that its richness in zinc, vitamin C and sucrose provide, make this plant suitable in the external treatment of skin diseases:

Golden seal: a plant to cure diseases of the urinary system

Its anti-inflammatory and bactericidal properties have been used in the treatment of diseases caused by infectious agents in the urinary tract. Supplements of this plant may be suitable for inflammation of the bladder or cystitis. (Take capsules or make decoctions of rhizome powder of golden seal sold in pharmacies or herbalists according to the conditions of the leaflet)

Other applications of golden seal

In addition to the above, the products of this plant are sold freely, with dubious effectiveness, in many preparations for the treatment of other conditions such as constipation, allergy, anorexia, etc.

They can be found in pharmacies and specialized stores prepared as capsules, tinctures, creams or ointments, dry plant powder or gelatin wrappers that can be used with totality provided that the directions in the package leaflet are followed and according to the indications of the practitioner or health specialist.

It should not be forgotten that its content in alkaloids makes it a very potent substance, which, improperly used, can be toxic.

Fundamentally the use of the preparations of this plant currently focus on the following medicinal properties.

INDUSTRIAL PROPERTIES OF THE GOLDEN SEAL

This plant contains very potent alkaloids that can cause toxicity when the indicated doses are exceeded. Among its toxic properties are its abortive capacity, so it should not be given to pregnant women or infants.

Cases of intoxication have occurred in animals and in people due to the excessive use of preparations made with this plant. Among the symptoms described, we have irritations of the intestinal mucosa with diarrhea, vomiting and ulcer formation. High doses may cause convulsions and heart rhythm disturbances.

It may be toxic due to accumulation of alkaloids. Therefore, preparations should not be taken with this plant for more than 20 days, taking breaks of at least 15 days.

It is not advised to use it with anticoagulants and anti-inflammatories. Its use in this case could produce an excessive fluidity of the blood when combined with other plants with similar properties.

It is not advisable to use it with people who suffer from hypertension.

Although it is one of the most fashionable medicinal plants today and the most used as a home remedy in the United States, it is advisable to only take this plant under the supervision of a specialist.

More information on golden seal toxicity, contraindications and side effects.