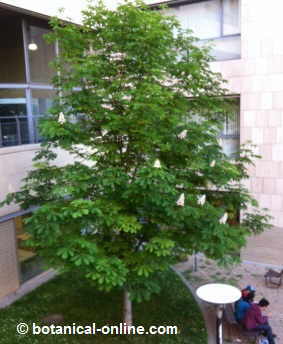 General aspect of a horse chestnut in a street

Scientific name: Aesculus hippocastanum L. (“hippocastanum” means horse chestnut, from Hippo = horse and castanum = chestnut. It was so called because its fruit was formerly used to feed horses and other animals)

Natural from northern India, Asia Minor, Greece, Bulgaria, the Caucasus and the Himalayas. Now it appears as a cultivated garden tree in many parts of the temperate world, especially in northern Europe and North America. 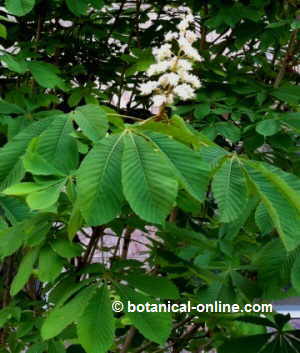 Deciduous tree of the Hipocastanaceae family till 15 to 20 tall.

Leaves opposite, dark green, and long stalked with 7 leaflets ovate-lanceolate, serrated margin, wider towards the apex.

Flowers pink or white, rarely yellow, grouped in clusters of pyramidal shape. Calyx consists of 5 petals with a wavy red spot at its base. With 5 sepals.

Fruits in capsule, covered with spines, with 1 to 3 cells, containing the brown seeds (nuts).

It blooms from early spring to midsummer. The fruits ripen in autumn.

Collecting and conservation: The bark has to be collected in spring, the fruits in early autumn. The first must be dried in the shade. The fruits should be dried in the sun. Both must be preserved in cloth bags protected from light and moisture. 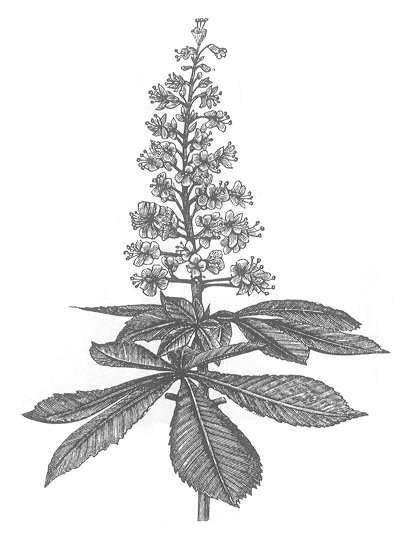 Horse chestnut is one of the best remedies for toning up the arteries and capillaries.

This property is attributed to its richness in aescin and aesculin, two components that have the ability to prevent edemas formation and to increase the resistance of blood vessels.

For this reason, it has been used in traditional medicine in a variety of conditions affecting the circulatory system.

Its principles are also used in the pharmaceutical industry for the production of medicines and in the cosmetics industry for making shampoos or other products for the beauty of the skin.

The capacity of this plant to prevent the formation of edemas or liquid retention is due primarily to aescin, but also by other components such as ascorbic acid or vitamin C and flavonoids quercitrin and routine, the latter especially useful in cases of capillary fragility.

On the other hand, we must take into account that its anti-inflammatory properties are well suited for swollen veins or its astringent properties, especially useful in the treatment of hemorrhoids and the treatment of skin problems. The horse chestnut tree astringency is due to its richness in tannins.

Supported by these principles, the use of this plant as a natural remedy is justified in many applications such as:

INTERNAL USE PREPARATIONS WITH HORSE CHESTNUT

The use of this plant prevents the formation of varicose veins or reduce their inflammation when they are formed, at the same time, avoiding the typical ulcers that often accompany them. This results in reducing the pain they produce, so it can be considered a natural alternative to creams for reducing varicose veins.

It can prevent or delay the need to eliminate varicose veins with the use of surgery. Sometimes, it simply helps reduce superficial leg veins, preventing or reducing the annoying and ugly blue veins in the legs that varices produce.

It is ideal as a preventative in many situations that can trigger the onset of these anomalies (people who work long hours standing, people with poor circulation in the legs that often end up with varicose veins, tired legs from a continuous hard task, heat on the legs, etc..).

The safest way to take this product is through a standard complement aescin that can be found in pharmacies and herbalists. The usual dose is generally about 500 mg daily in the morning. You can also use the liquid from the decoction of the bark. (One teaspoon per cup of water. Take a couple of cups a day)

Horse chestnut for the natural treatment of hemorrhoids

Used to control or prevent hemorrhoids or dilated veins of the rectum. (Suppositories containing the principles of this plant available in pharmacies) (You can also apply the earlier treatment for varicose veins)

Horse chestnut for inflammation of the veins

The anti-inflammatory properties of horse chestnut can be used, besides for the two previous treatments, for a number of situations in which, for various reasons, there is a swelling of blood vessels, especially one that affects to the legs.

In all cases the use of this plant reduces swelling and alleviates the sensation of burning or heaviness in the lower extremities. Among these anomalies, we could mention tired legs because of a problem of fluid accumulation in them, heavy legs as a result of a poor leg blood flow, tingling in the feet, calf cramps, etc..

Sometimes it can be useful for other major diseases such as phlebitis or a vein inflammation caused by a blood clot (thrombophlebitis). In these latter cases, horse chestnut is a natural remedy in the prevention of embolism or thrombosis including those that may occur after surgery. It has proved useful in the treatment of inflammation of the veins of the scrotum (varicocele), a very painful condition (Cooking of 50 gr. of bark per liter of water. Two cups a day)

It is appropriate in the treatment of other inflammatory conditions such as for benign prostate growth where it helps reduce inflammation by promoting the feeling of not being so full and reducing the number of voids. (30 drops of fluid extract divided into three doses)

Other uses of horse chestnut in phytotherapy

EXTERNAL USE PREPARATIONS WITH HORSE CHESTNUT

Externally, this plant has been used to treat the circulatory problems mentioned above: 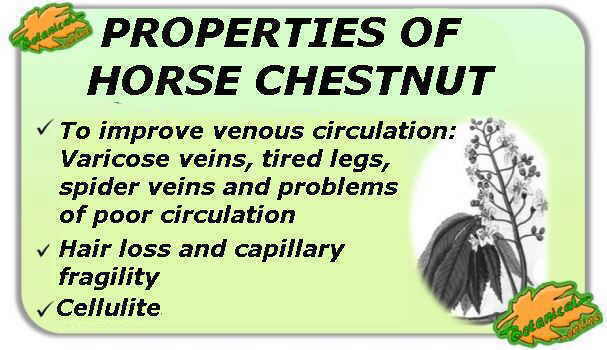 Allantoin: The component of horse chestnut to protect the skin

The bark of this tree is rich in allantoin, a component with very beneficial properties for the care and maintenance of skin health. Allantoin, which is used in the composition of numerous creams, has vulnerary, antiulceric and anti-inflammatory properties.

Horse chestnut is a plant that has more proportion of this principle only surpassed by comfrey. Other plants rich in this component are the bear’s grape and the borage. Among its main virtues we would mention:

This tree has hemostatic properties, that’s to say it has the ability to stop bleeding. Ascorbic acid and quercetin are the principles that give it this property.

The decoction of the bark of horse chestnut can be applied in conditions such as gingivitis, gum bleeding, nosebleeds, etc, in which case it stops bleeding and has an analgesic function.. (Mouthwashes with the liquid from the decoction of 50 gr. of bark in a liter of water for 10 minutes)

Horse chestnut, a remedy for chilblains.

In external use, the fruits of this plant can be used for the treatment of chilblains. (Boil a handful of fruits. Once boiled, remove the skin and mash them to convert them into a paste which is applied as a poultice on the affected area. Cover it with with a gauze)

Contraindications and toxicity of horse chestnut

The green fruits and the green fruit peels (bark with thorns or pericardium) are toxic by their content in aescin, a saponin. Because they are very bitter taste, is very surprising that someone could ingest them.

Formerly, in times of famine and war, they were used for human consumption, after removing the escin content. So, in the past several serious poisoning took place. The most characteristic symptoms of this poisoning are gastrointestinal problems, vomiting, stomach pain, fever, headache, dilated pupils, cardiorespiratory problems, cardiac arrest, etc. (More information on saponins)

The buds, tender stems, the leaves and flowers, to a lesser extent, contain a glycoside called aesculin that is toxic for his extreme anti-clotting properties. Accidents have occurred when using the flowers and tender shoots in internal treatments.

Poisoning has also been detected in animals that have been fed on branches of this tree.

Horse chestnut should not be administered during pregnancy or breastfeeding or blood clotting problems.

Preparations with aescin can cause gastrointestinal problems in internal treatments. Used externally, they can cause adverse reactions to the skin.