Habitat. Where to find honeysuckle?

Species native to southern Europe where it can be found on walls, hedges, woods or ditches.

It has been introduced in many countries as a cultivated species and, in many cases, it may be naturalized. 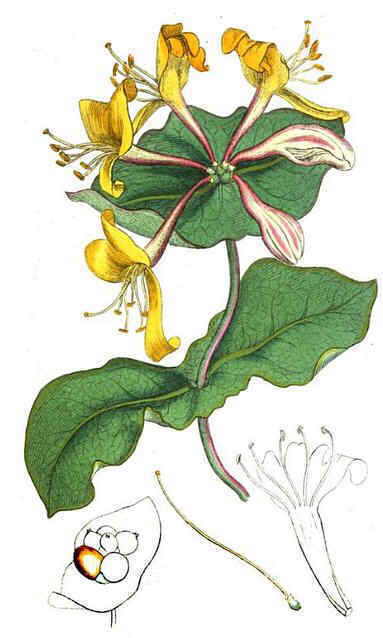 Drawing of the plant, with a sectioned flower and fruits

Shrub of the Caprifoliaceae family, up to 2 m (6 m when cultivated).

Leaves opposite, oval, till 10 cm in length, light green color on the underside, darker above, pointed; The upper ones, united at their base; The lower ones, with petiole.

Flowers grouped in tops without floral peduncles, sitting directly on a kind of cup that is formed by the upper leaves (what distinguishes it mainly of the rest of honeysuckles).

It blooms between May and June and the fruits are formed in autumn. It is pollinated mainly by moths that come at night attracted by the fragrance of its flowers.

Collection and conservation of honeysuckle

Honeysuckle flowers are collected in spring and early summer.

The leaves are also collected while the plant has flowers.

Flowers and leaves must be dried in the shade.

The flowers should be kept in airtight, opaque and dry containers, while the leaves are best kept in cloth bags.

PREPARATIONS WITH HONEYSUCKLE FOR INTERNAL USE

Honeysuckle, a traditional remedy for the respiratory system

The flowers of this plant have properties suitable for the treatment of respiratory diseases. Fundamentally, its richness in carvacrol, geraniol and chlorogenic acid provide its antiseptic properties; Carvacrol and luteolin are antitussive; And all these components have anti-inflammatory properties.

All this makes honeysuckle very suitable for the treatment of conditions such as:

Honeysuckle has been widely used for its hepatoprotective properties. It protects the liver, tones it and helps it to recover when it is affected by some disease or some toxic product.

This has been used mainly for the treatment of:

In both cases, make a decoction for 5 minutes of three tablespoons of dried leaves and one teaspoon of dried flowers. Let it cool and take a couple of glasses a day before the two main meals

Is honeysuckle suitable for treating constipation?

Although the fruits of this plant or its seeds have been used in the past as purging or vomiting, they are very toxic and it is more convenient NOT to use them in the treatment of constipation.

The diuretic properties of this plant have been used to remove excess leftovers from the body and to purify the body in general. The richness in calcium, magnesium and potassium, along with luteolin and chlorogenic acid are responsible for this activity. All this is used fundamentally to treat anomalies such as:

Honeysuckle for the nervous system

Honeysuckle contains sedative properties that can be used for the treatment of nerves and arrhythmias or palpitations that have a nervous origin. (Infusion of one teaspoon of dried flowers per cup of water. Take a couple of cups a day)

These same properties can be used to relax muscles and decrease involuntary spasms.

EXTERNAL USE REMEDIES WITH HONEYSUCKLE

Honeysuckle for injuries and skin problems

Is the medicinal use of honeysuckle dangerous?

The use of flowers and leaves in appropriate doses does not present side effects, although it is recommended NOT to use it in case of pregnancy or lactation, because there are few studies with respect to it.

Although no poisonings have been described in the medicinal use of flowers and leaves, you have to be extremely cautious in the preparations since this plant contains toxic principles.

All honeysuckles are very rich in saponins and principles similar to nicotine. These principles attack the digestive system causing vomiting, diarrhea, convulsions, heart alterations and even death.